TV’s “The Bible”: “Hollywood will never be the same after this”

Every New Yorker’s paper of record—the Post!—dissects the phenomenal popularity of the hit cable series:

‘The Bible” is a phenomenon all over again.

The miniseries — which has been airing over five Sunday nights with its finale neatly planned for Easter night — has shaken up the TV world.

“Hollywood,” says one veteran TV producer,” will never be the same after this.”

Here are five reasons it is not like other TV shows: 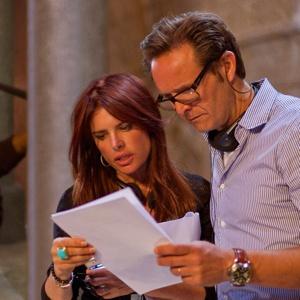 1. ‘The Bible” was made by a ragtag collection of reality TV directors and writers who had never worked on a scripted TV show before.

Much has been made of the no-name actors — a deliberate decision by producer Mark Burnett, creator of “Survivor,” so that viewers would not have some type of recognition that would take away from the story.

Not noted was the fact the writers and directors of the 10-hour series had almost no background in scripted TV.

Crispin Reece, who directed most of the first four episodes of “The Bible,” including “In the Beginning” and “Exodus,” was last employed directing episodes of “I Shouldn’t Be Alive,” an Animal Planet show about close brushes with death.

Canadian Tony Mitchell, who also directed parts of the Old Testament episodes, directed a Roy Orbison tribute and a TLC miniseries called “When Dinosaurs Ruled” before this.

Chief writer Richard Bedser has not a single drama to his credit. His last two jobs were writing TV documentaries “Gettysburg” and “ 9/11 State of Emergency.”

“There’s no reason to hire those guys other than the fact the Burnett felt more comfortable with them,” said a Hollywood studio exec.

“He could have gotten people with experience doing scripted shows for the same money.”

2. The series was cheap to make — scary cheap.

“Hell,” said one veteran TV producer, “HBO spends that for two episodes. Twenty-two million for a miniseries like that is unheard of.”

Because she was an executive producer on the project, Downey — who is married to Burnett — did not think it wise to act in the series also.

“It’s not the kind of thing an executive producer does,” says someone who knows her but asked to remain unnamed.

The “Touched by an Angel” star agreed to take the part because filming was scheduled to begin and no one had been cast in the part yet.

Read the rest, including how they managed to raise awareness of the series in “flyover country” first.

The History Channel’s special “The Bible” continues through March 31. Co-produced by Mark Burnett, of Class-A reality stuff like “Survivor,” “My Dad Is Better Than Your Dad,” “Bully Beatdown.” So this dude behind “The Shark Tank,” “The Apprentice” and “The Voice” knows from scripture?

“My Presbyterian mother was Church of Scotland. My father, Catholic. Growing up, the Holy Book was always in my hand. And one day my co-producer wife, Roma Downey, who believes there’s biblical illiteracy here, suggested we do ‘The Bible.’

“There’s many biblical copyrights. We used all versions — King James, American Standard, International, even the Internet’s You Version with its 40 translations and 85 million downloads. We involved Orthodox Jewish scholars, Jesus disciples, 40 church academics, to make sure every chariot was authentic.

“The Hand of God was with us on this. We actually felt the Holy Spirit. Like we’re filming John 3. Nicodemus enters the garden. The talk is ‘You have to be born again,’ and Jesus says such words as, ‘It’s like the wind.’ This is 1 a.m., in a calm quiet Sahara oasis. Suddenly, from nowhere, a sustained wind blew through the set. Nothing caused it. We were startled.

“Jesus’ robes blew. Jesus’ hair blew. All faiths, including atheists, were in the crew. Everybody felt it. On the side watching the monitors, I felt it. Every one of us knew Something had happened.”

March 19, 2013 Pope Francis' homily at inauguration Mass: "Let us be protectors of creation"
Browse Our Archives
Related posts from The Deacon's Bench