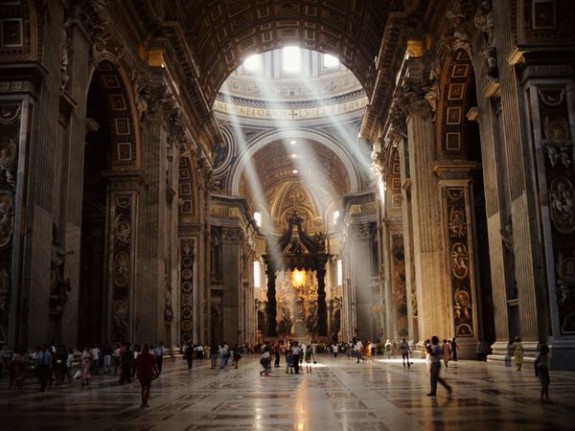 Regarding the beginning of the ceremony, the Pope, once having entered the Basilica, will head to the Confession (St. Peter’s tomb under the high altar) while trumpets will announce the “Tu es Petrus”. The Pope will venerate the tomb of St. Peter, together with the Patriarchs and Major Archbishops of the Eastern Rite Catholic Churches (ten in number, four of whom are cardinals). He will then be presented with the Pallium, Ring, and Book of the Gospels that were placed at St. Peter’s tomb the night before.

The Holy Father will then come back up from the Confession to the main floor of the Basilica, from which the procession continues. The “Laudes Regiae” (Christ is King) will be chanted, with some invocations taken from the Vatican II document on the Church, “Lumen Gentium”. In the Litany of Saints are particularly to be noted, after the Apostles, the Holy Roman Pontiffs who have been canonized up to the most recent: St. Pius X. Fr. Lombardi clarified that these are only the pontiffs who have been named as saints, not those who have been beatified. The procession will then make its entrance into the square.

Fr. Lombardi listed who will be concelebrating the Mass with Francis: all the cardinals present in Rome, joined by the Patriarchs and Major Eastern Rite Archbishops (6); the Secretary of the College of Cardinals; and two Superior Generals (that of the Order of Friars Minor, Jose Rodriguez Carballo and that of the Jesuits, Adolfo Nicolas Pachon, respectively President and Vice-President of the Union of Superior Generals). In total about 180 are expected to concelebrate and they will be seated at the left (that is, in front of the ecclesiastics, not the national delegations).

Before the Mass begins there are the rites specific to the beginning of the Bishop of Rome’s Petrine Ministry. These include:

The Imposition of the Pallium:
Made of lamb’s wool and sheep’s wool, the Pallium is placed on the Pope’s shoulders recalling the Good Shepherd who carries the lost sheep on his shoulders. The Pope’s Pallium has five red crosses while the Metropolitans’ Palliums have five black crosses. The one used by Francis is the same one that Benedict XVI used. It is placed on the Pope’s shoulders by Cardinal proto-deacon Tauran and, after the imposition, there is a prayer recited by Cardinal proto-presbyter Daneels.

The Fisherman’s Ring:
Peter is the fisherman Apostle, called to be a “fisher of men”. The ring is presented to the Pope by Cardinal Deacon Sodano (first of the Order of Bishops). It bears the image of St. Peter with the keys. It was designed by Enrico Manfrini The ring was in the possession of Archbishop Macchi, Pope Paul VI’s personal secretary, and then Msgr. Malnati, who proposed it to Pope Francis through Cardinal Re. It is made of silver and gold.

The “Obedience”:
Six cardinals, two from each order, among the first of those present approach the Pope to make an act of obedience. Note that all the Cardinal electors already made an act of obedience in the Sistine Chapel at the end of the Conclave and that all the cardinals were able to meet the Pope in the following day’s audience in the Clementine Hall. Also, at the moment of “taking possession” of the Cathedral of Rome—St. John Lateran—it is expected that the act of obedience will be made by representatives of the various members of the People of God.

The Mass will be that of the Solemnity of St. Joseph, which has its own readings (therefore they are not directly related to the rite of the Inauguration of the Pontificate). The Gospel will be proclaimed in Greek, as at the highest solemnities, to show that the universal Church is made up of the great traditions of the East and the West. “Latin,” Fr. Lombardi said, “is already abundantly present in the other prayers and Mass parts.”

Among other things: the homily will be in Italian and will likely “contain improvisations” away from the prepared text; there will be no offertory procession; the pope will not distribute communion, but it will be done by priests and deacons.

In a world where the Arab Reawakening continues to cause great alarm among Christians in the Middle East, Pope Francis’ decision to postpone his first public audience in order to meet with the Catholic patriarchs and major archbishops of the Eastern churches is also significant. This might be an indication that Pope Francis is concerned about the unity of the church. It might be a sign also that he is concerned about the catholicity of the church in a way that we have not seen for a while. Yet in all this, only time will tell.

It is still probably better to participate in and observe Pope Francis’ inauguration as a believer rather than as a detective.

March 18, 2013
Letting go: the challenging lessons of Benedict and Francis
Next Post

March 18, 2013 TV's "The Bible": "Hollywood will never be the same after this"
Browse Our Archives
Related posts from The Deacon's Bench