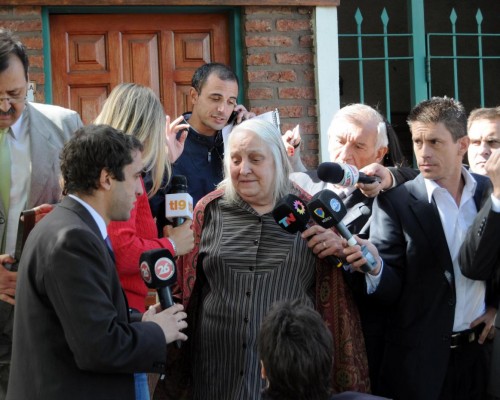 NCR’s John Allen has arrived in Argentina, and wasted no time tracking down the most important interview subject in the country: the pope’s sister.

Though there aren’t yet hard numbers to back it up, it’s a good bet that the single most interviewed human being on the planet since March 13, 2013, has been a simple 64-year-old housewife in the Argentine city of Ituzaingó, about an hour outside Buenos Aires.

The woman is Maria Elena Bergoglio, and her older brother Jorge today is known to the world as Pope Francis. They’re the last surviving siblings of five children, and since the moment Francis stepped out onto the balcony overlooking St. Peter’s Square, Maria Elena become the go-to point of reference for insight on the new pope.

Listening to her, she seems cut from the same cloth as her now-famous sibling: Humble and unpretentious, and also completely unafraid to speak her mind.

For instance, when stories began to make the rounds about Francis having become a priest only because a young love rejected his marriage proposal, Maria Elena was there to bat it down. She insisted that her brother was only a kid at the time, and the idea of getting married was never serious. More ominously, when critics suggested that her brother had been complicit in Argentina’s military junta, Maria Elena testily pointed out that her family emigrated from Italy because their father was opposed to fascism … the clear suggestion being that Jorge Mario Bergoglio would never betray his father’s memory by cozying up to dictators.

Over the last three weeks, Maria Elena’s modest one-story home on an obscure street has become a sort of impromptu journalistic pilgrimage destination. She says that from the morning of March 14 all the way through Holy Week, her phone started ringing at 5 am and people started knocking on her door at 6, every day, until well after dark every night.

One might think that by this stage Maria Elena is already talked out, but in an hour-long interview with NCR this morning, she managed to add several new points to the record:

On other matters, Maria Elena discussed the two phone conversations she’s had with her brother since he became pope, her hopes for him to visit to Argentina (and to give her two minutes for a hug), and outlined the kind of people she believes he’ll bring into key positions.

Invocation of Saints and Angels (vs. Jason Engwer)
Luke 16 (Lazarus & the Rich Man & Abraham) is One of...
view all Catholic blogs
Copyright 2008-2020, Patheos. All rights reserved.