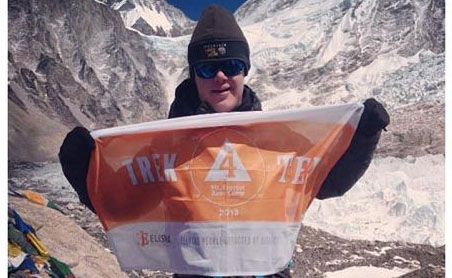 A courageous young man from Oregon made history with the first recorded account of an American teenager with Down syndrome to reach a base camp of Mt. Everest. After nearly two weeks of walking, 15-year old Eli Reimer reached 17,600 feet. Eli’s father, Justin, joined his son for the ascent in an effort to raise funds for their family’s charity, The Elisha Foundation.

“It was surreal,” Justin Reimer told HLN in an interview. “To be standing there at that place and see the smile on Eli’s face and the sense of accomplishment that he had, and the fact that his health was better than any of us at that point… it was humbling, it was inspiring, just an amazing moment.”

The father and son duo ultimately raised $85,000 for The Elisha Foundation, which says it offers professional and educational support to families with special-needs children.

“For anybody who has a child with a disability or who is impacted in some way … the disability is not a limitation,” said Justin Reimer, adding that Eli’s life “and the lives of those with disabilities have infinite worth.”

April 3, 2013
Judge rules that deacon's company will not have to provide contraception coverage
Next Post

April 4, 2013 Meet the pope's sister
Browse Our Archives
get the latest from
Catholic
Sign up for our newsletter
POPULAR AT PATHEOS Catholic
1