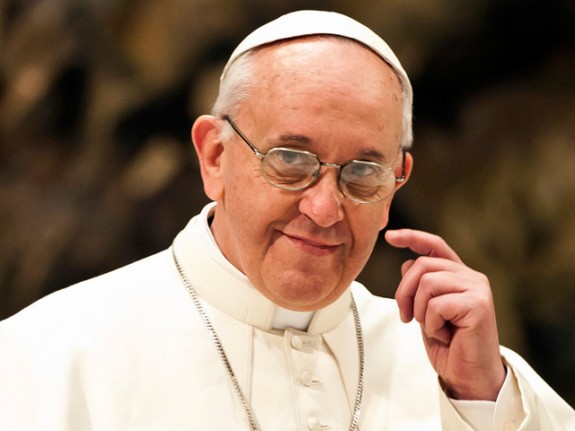 Fr. Michael P. Orsi—a research fellow and scholar at Ave Maria University in Florida— makes some observations about what Francis can change, and what he can’t:

Church discipline is the rules the church enforces for the good of her members.  These often have a long history and must not be tampered with lightly.  However, they can be changed for the good of the community.  The ancient demand that priests in the Western church be bound by celibacy is just such an example.   As Archbishop of Buenos Aires, Francis, then Cardinal Bergoglio, in a book ON HEAVEN AND EARTH, which recorded his conversations with a rabbi said, celibacy “is a matter of discipline, not of faith.  It can change.”  He further noted that this discussion is often brought about by “pragmatism”, based on the loss of manpower and perhaps cultural reasons.

With a return to respect for the needs of local churches the celibacy issue may once again be in play.  A bishop may believe that providing the Eucharist is more important than the discipline of celibacy. This is known as epikeia. It is a theological principle whereby a higher law is recognized as taking precedence over a positive law for the sake of the common good. It is summed up in the words of Pope Gregory IX who said, “Necessity makes licit what is illicit.”

The non-viability of the ordination of women found in the Code of Cannon Law n.1024 may also be deemed a matter of discipline in the case of the diaconate. Because the church teaches that deacons do not share in the Order of Priesthood, which is irrevocably closed to women, deaconesses may be a possibility, especially since they existed in the early church.

The problem, however, is that the role deaconesses played in the early Church is spurious.  And, unlike the celibacy requirement which only came about in the West in fits and starts for the first millennium and has been always optional in the Eastern Church, deaconesses disappeared during the ante-Nicene period (325 AD).

So, how will women deacons come about? Very similar to the way altar-girls did. After a long period of illicit ordinations and a barrage of appeals from bishops around the world, a Pope will submit the question to The Pontifical Council for the Interpretation of Texts which found no prohibition to altar-girls in The 1983 Code of Canon Law.  The Council’s nihil obstat was used by Pope John Paul II to permit girls to serve Mass in 1994. This was a break with an ancient tradition almost 2000 years old which reserved the role of acolyte to men only.  It set a dangerous precedent since it presumes that if an immemorial custom is not specifically prohibited it can be permitted. It is doubtful that any canonist or for that matter the Pope realized that the Code permitted altar-girls. The recognition of women as eligible for the deaconate will follow a similar path.

This break with unwritten customary law is analogous to the current efforts to legitimize same-sex marriage. Many will contend that because it is not specifically outlawed in The Constitution or in state law, it is therefore permissible. The fact is that same-sex marriage is neither permitted nor prohibited because it was unimaginable to past generations. So too the case with female deacons.

In both of these areas change will begin at the grassroots and only gradually.

Check out the rest.  The author makes some striking observations, mostly predicated on Pope Francis’ preferred title: “Bishop of Rome.”

UPDATE: In a related essay that looks at similar themes, Elizabeth Scalia gives us some healthy food for thought in this piece for OSV.  Is Francis an agent of change or continuity?  You decide.

And canon lawyer Ed Peters has a few thoughts, too.  He’s not impressed:

Folks are free to predict, and even argue for, the end of celibacy and the ordination of women as deacons if they want, but those arguments must be made competently lest serious confusion be sown along the way. Fr. Michael Orsi’s recent essay “Reading the tea leaves” concerning these and related matters calls for several corrections.

Read what they are.

April 24, 2013
Church says it has no information on kidnapped bishops, after group claims they have been freed
Next Post

April 24, 2013 TV's "The Bible" headed to movie screens this fall
Browse Our Archives
get the latest from
Catholic
Sign up for our newsletter
POPULAR AT PATHEOS Catholic
1

7QT: Life as a Walking Knock-knock Joke
Since it's that time of week, seven things to make you glad...
view all Catholic blogs
Copyright 2008-2021, Patheos. All rights reserved.