The Francis Effect: lapsed Catholics lured back by new pope 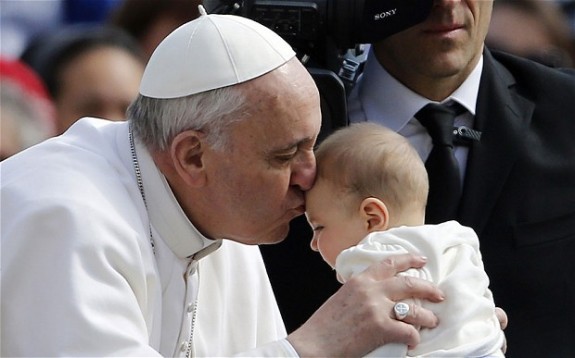 It’s a phenomenon I know a lot of clergy have reported at their parishes: a dramatic uptick in Mass attendance over the last few weeks, and not just because of Easter.

Is it the “Francis Effect”?

Twenty million Americans consider themselves lapsed Catholics, but Pope Francis is convincing many to test the holy waters again with his bold gestures and common touch.

After years of disenchantment with the church’s hierarchy and teachings, former members of the flock say they are willing to give the Vatican a second chance under new leadership.

Dallas teacher Marilyn Rosa is one of them.

“It was a sign,” Rosa, 57, said of the Argentine Jesuit’s election as pontiff last month. “It was like a miracle.”

Born and raised Catholic, Rosa attended parochial schools and had a church wedding for her first marriage. Over the years, she drifted away from the religion that had been such an integral part of her Puerto Rican family’s life.

She questioned the relevance of church policies in the modern world. As a divorced woman, she felt cast out. The pedophile-priest scandals disgusted her.

Three years ago, she quit going to Mass and joined an evangelical church. But she didn’t feel at home and she started to wonder how she could fill the void.

“The day the pope got elected, I turned on the TV and when I learned he was Latin, I went crazy at home,” said Rosa.

“When they started to talk about how he lived by himself and didn’t move into the archbishop’s residence, how he took the bus to work, I said, ‘I know God is talking to me. This is the man we needed.'”

“It was packed. I had to stand up the whole time. But I felt so happy. It was like a revival,” she said.

Rosa has kept going to back to St. Pius, encouraged by what she’s seen of the pope: from the simple white robe he wears to his rejection of the opulent papal apartment in favor of a spartan guest house.

“He’s not letting himself be controlled by the rest of the church,” Rosa said. “He’s his own man.”

It’s unknown how many others have joined Rosa around the country and globe and the vast majority of lapsed Catholics have not been enticed back. In the U.S., that’s a huge pool of potential “new” members for an institution challenged by secularism and rival religions.

A 2009 report by the Pew Forum on Religion and Public Life estimated one in 10 adults in the U.S. was raised Catholic but has broken with the church. Its teachings on abortion, homosexuality, birth control and treatment of women were often cited as reasons.

Pope Francis hasn’t given any hint of radical change on those issues, but his man-of-the-people persona is appealing to some of the unfaithful.

Tom Peterson, president of Catholics Come Home, which airs ads aimed at the lapsed, said his website traffic tripled the day of the election, adding several thousand visitors. It’s been double ever since.

Some interest could stem from the hubbub surrounding the selection of any pontiff, but Peterson thinks Francis’ “love for the poor and his humility is exciting people to a great extent.”

Father Peter Mussett, pastor of the St. Thomas Aquinas Catholic Center, which serves the University of Colorado at Boulder, agrees.

“I had five people in a week who were saying, ‘Pope Francis has inspired me to return to my faith,'” he said. “It’s pretty remarkable.”

April 10, 2013 Just another Wednesday at the Vatican
Browse Our Archives
get the latest from
Catholic
Sign up for our newsletter
POPULAR AT PATHEOS Catholic
1

Justice Brings God’s Pardon To The World
Justice is important. God desires us to seek after and promote it....
view all Catholic blogs
Copyright 2008-2021, Patheos. All rights reserved.