“Cardinal Dolan Would Not, Did Not, Suggest Governor Cuomo Might Not Be a Catholic in Good Standing…”

“Cardinal Dolan Would Not, Did Not, Suggest Governor Cuomo Might Not Be a Catholic in Good Standing…” May 19, 2013 Deacon Greg Kandra

After New York Cardinal Timothy Dolan appeared to suggest during a radio interview this week that he may not view pro-abortion Governor Andrew Cuomo as a Catholic “in good standing,” the archdiocese has issued a statement saying that this is not the case, and that Dolan’s remark was misunderstood. 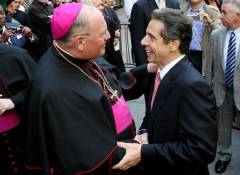 “Cardinal Dolan would not, and did not, suggest the governor might not be a Catholic in good standing going forward,” archdiocesan spokesman Joseph Zwilling said in a statement originally sent to the New York Times, and forwarded to LifeSiteNews.

Dolan made the remark during a discussion about Gov. Cuomo’s intention to propose a law to make abortion less regulated and more accessible. Cuomo announced the initiative during his State of the State address in January, in which he pledged to “protect a woman’s freedom of choice” by enacting a “Reproductive Health Act.”

During this week’s radio interview, the host of the show, Fred Dicker, asked Cardinal Dolan how Cuomo “could be a leader on an issue that the Church fundamentally feels so strongly about,” namely abortion, and “still be considered a Catholic in good standing?”

“Well, I don’t mind telling you that’s one of the things the governor and I talk about,” Cardinal Dolan responded. “And look, he and I have very grave differences. And this is one of them.”

May 19, 2013 Followup: Worcester Bishop Loses License, Charges Dismissed for DUI
Browse Our Archives
get the latest from
Catholic
Sign up for our newsletter
POPULAR AT PATHEOS Catholic
1