From the Los Angeles Times: 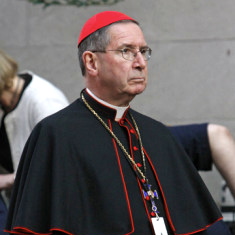 No longer would Mahony preside at springtime rites in which teenagers receive the sacrament that marks full passage into the Catholic Church, the spokesman said.

But three months later, Mahony is back doing confirmations. Since Easter, he has officiated at eight services, including one last week in which he anointed more than 120 youths at a Wilmington parish.

His presence has caused controversy, with some parents threatening to pull their children from the liturgies and at least one parish priest asking that Mahony not attend. It has also raised questions about why Gomez’s rebuke of Mahony, an unprecedented move that won him praise from victims and their supporters around the world, had so little lasting effect.

Gomez’s January letter to the region’s more than 4 million Catholics seemed to rule out any conspicuous place for Mahony in the archdiocese. Noting that the cardinal had “expressed his sorrow for his failure to fully protect young people entrusted to his care, ” Gomez told the faithful, “Effective immediately, I have informed Cardinal Mahony that he will no longer have any administrative or public duties.”

Rather than recede from the spotlight, however, Mahony has become more prominent.

May 10, 2013 Priest dies two days after ordination —UPDATED
Browse Our Archives
get the latest from
Catholic
Sign up for our newsletter
POPULAR AT PATHEOS Catholic
1