Man spends four years writing out the Bible by hand 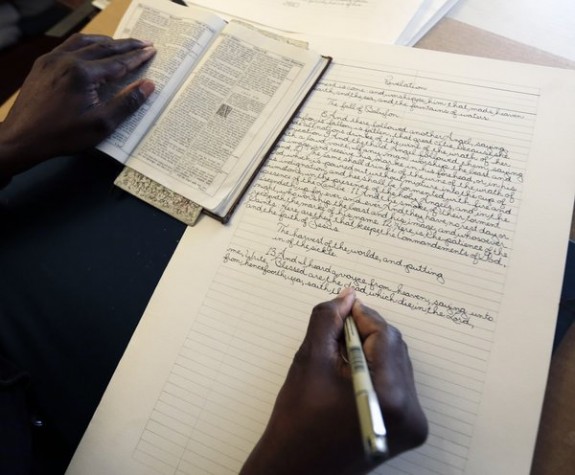 A man in upstate New York has just about finished a task that was common enough until the invention of the printing press: Over the past four years, he has copied the King James Bible by hand, the Associated Press reports.

Phillip Patterson, a 63-year-old resident of Philmont, N.Y., a town near the Massachusetts border, may be an unlikely scribe for the Bible. He is not especially religious, for one thing, though he does go to church.  A retired interior designer whose battles with anemia and AIDS have often slowed his work, he began the monumental task mostly out of curiosity.

In 2007, Patterson’s longtime partner, Mohammed, told him about the Islamic tradition of writing out the Koran by hand. When Patterson said that the Bible was too long for Christianity to have a similar tradition, Mohammed said, well, he should start it.

Although counts disagree, according to most sources, the King James Bible has 788,000 words or more.

Patterson uses sheets of 19-by-13-inch watercolor paper for his task, which he rules by hand with pencil lines. Sitting at a desk by his bed, he tracks the page of his hardcover Bible with one hand, and writes, using felt-tip pens, with the other. When the page is finished, he erases the pencil lines, leaving black ink on a clear white page.

At first, Patterson used to work 14-hour days on the project, and he still works until he can no longer stay awake, usually about six to eight hours a day.  He says he particularly enjoyed working on the Book of Ruth, disliked all the plagues and killing, and found the character of Jesus somewhat glib, though he found his message laudable. There were times, Patterson said, when he didn’t think he would live to finish, but now he believes he’s become more patient, more loving, and more open to difference due to this work.

The project has been documented by photographer Laura Glazer, who has shot more than 4,000 pictures of Patterson at work. According to Glazer, Patterson has little in common with the medieval monks whose task this historically was. “He’s not a martyr or a saint,” she said. “That’s what’s so nice. It’s just what he does. He’s not trying to prove anything to anybody. He’s making something beautiful.”

May 6, 2013
"This is not the way the church should function"
Next Post

The Deluge and the Garden
It was a steaming warm, cloyingly humid Saturday afternoon. It started out...
view all Catholic blogs
What Are Your Thoughts?leave a comment