On feast of St. Joseph the Worker, pope pleads for an end to trafficking and slave labor

Marking the feast of St Joseph the Worker and World Labor Day this Wednesday May 1st, Pope Francis launched an urgent appeal to Christians and men and women of goodwill worldwide to take decisive steps to end slave labor. 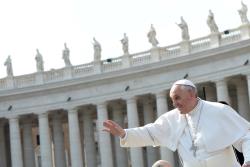 Speaking during the general audience in Italian he said : “I would like to add a word about another particular work situation that concerns me: I am referring to what we could define as “slave labor”, the work that enslaves. How many people worldwide are victims of this type of slavery, in which the person is at the service of his or her work, while work should offer a service to people so they may have dignity. I ask my brothers and sisters in faith and all men and women of good will for a decisive choice to combat trafficking in persons, which includes “slave labor”.

Taking advantage of bank holiday and the unseasonably hot weather, an estimated 70,000  people descended on St Peter’s Wednesday morning, queuing from dawn to ensure their place in the square for the audience with the Pope.

Many among the pilgrims belonged to Catholic Confraternities from all five continents who are preparing two days of celebration together with the Pope as part of the great events organized by the Pontifical Council for Promoting the New Evangelization for the Year of Faith.

But the vast majority of those gathered were young people, boys and girls as well as thousands of teens and University students. Speaking directly to them, Pope Francis said: “I would like to speak especially to you young people: be committed to your daily duties, your study, your work, to relationships of friendship, to helping towards others; your future also depends on how you live these precious years of your life. Do not be afraid of commitment, sacrifice and do not look with fear towards the future; keep your hope alive: there is always a light on the horizon”.

The Pope was referring to his earlier reflection on the current employment crisis that is afflicting many nations worldwide. Pointing to the figure of St Joseph the Worker, Pope Francis said:

“Work is fundamental to the dignity of a person. Work, to use an image, “anoints” us with dignity, fills us with dignity, makes us like God, who has worked and still works, who always acts (cf. Jn 5:17); it gives you the ability to maintain ourselves, our family, to contribute to the growth of our nation. And here I think of the difficulties which, in various countries, today afflicts the world of work and businesses; I think of how many, and not just young people, are unemployed, many times due to a purely economic conception of society, which seeks selfish profit, beyond the parameters of social justice.

Read more, including a full transcript of his remarks, here.

April 30, 2013
FDA announces plan to sell Plan B contraception over the counter, lowers age limit to 15
Next Post

May 1, 2013 The Trappist nuns of Syria: "Christian hope...is stronger than all the horrors"
Browse Our Archives
Related posts from The Deacon's Bench