FDA announces plan to sell Plan B contraception over the counter, lowers age limit to 15

Details from the AP:

The government is moving the morning-after pill over the counter but only those 15 and older can buy it – an attempt to find middle ground just days before a court-imposed deadline to lift all age restrictions on the emergency contraceptive. 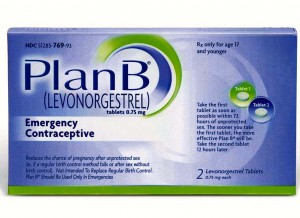 Today, Plan B One-Step is sold behind pharmacy counters, and buyers must prove they’re 17 or older to buy it without a prescription or else see a doctor first. Tuesday’s decision by the Food and Drug Administration lowers the age limit to 15 – and will allow the pill to sit on drugstore shelves next to condoms and spermicides or other women’s health products. But customers must prove their age at the cash register.

Teva Women’s Health, which makes Plan B, said it would begin over-the-counter sales in a few months.

The question is whether Tuesday’s action settles a larger court fight. Earlier this month, U.S. District Judge Edward Korman of New York blasted the Obama administration for imposing the age-17 limit, saying it had let election-year politics trump science and was making it hard for women of any age to obtain the emergency contraception in time. He ordered an end to all age restrictions by Monday, for Plan B and its generic versions.

The FDA said Tuesday’s decision was independent of the court case and wasn’t intended to address it. Technically, the FDA approved Teva’s application to sell Plan B in this manner.

The Justice Department remained mum on whether it planned to appeal Korman’s decision, and the White House had no immediate comment.

The women’s group that sued over the age limits said Tuesday’s action is not enough, and it will continue the court fight if necessary.

Lowering the age limit “may reduce delays for some young women but it does nothing to address the significant barriers that far too many women of all ages will still find if they arrive at the drugstore without identification,” said Nancy Northup, president of the Center for Reproductive Rights.

The FDA said the Plan B One-Step will be packaged with a product code that prompts the cashier to verify a customer’s age. Anyone who can’t provide such proof as a driver’s license, birth certificate or passport wouldn’t be allowed to complete the purchase. In most states, driver’s licenses, the most common form of identification, are issued at age 16.

“These are daunting and sometimes insurmountable hoops women are forced to jump through in time-sensitive circumstances, and we will continue our battle in court to remove these arbitrary restrictions on emergency contraception for all women,” Northup said.

May 1, 2013 On feast of St. Joseph the Worker, pope pleads for an end to trafficking and slave labor
Browse Our Archives
Related posts from The Deacon's Bench