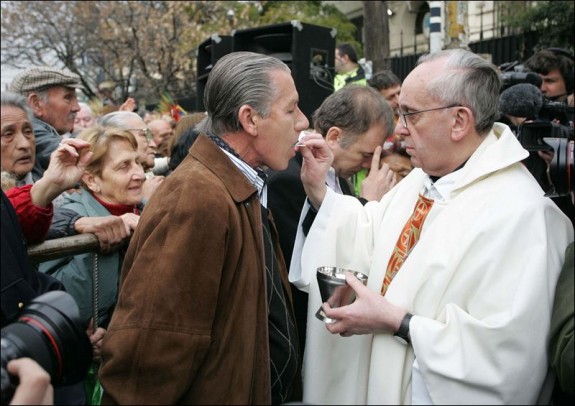 Before he became pope, he had some thoughts on the subject.  Fr. Thomas Reese explains in the National Catholic Reporter:

In On Heaven and Earth, the book he co-authored with Rabbi Abraham Skorka, Cardinal Bergoglio wrote, “One could deny communion to a public sinner who has not repented, but it is very difficult to check such things.”

One should note that he said, “could” not “must.” And as an experienced pastor, he stressed the difficulty of checking whether a person is “a public sinner who has not repented.” Many American bishops, like Cardinals Francis George and Donald Wuerl, have taken similar positions.

In the book, the communion issue came up not in the context of abortion but of injustice. He referred to those “who have not only killed intellectually or physically, but also have killed indirectly through the poor use of resources by paying unjust wages.” He called them hypocrites because “In public they may form welfare societies, but they do not pay their employees a wage corresponding to their work or they hire them ‘under the table.'”

So if you are paying your employees off the books, with no payroll taxes, then Pope Francis would consider you a “pretend” Catholic suffering from spiritual hypocrisy and schizophrenia. He acknowledged that there are many such people “who hide within the Church and do not live according to the justice that God proclaims.” If you are such a person, he would want you to ask yourself whether you are ready for communion.

April 30, 2013 FDA announces plan to sell Plan B contraception over the counter, lowers age limit to 15
Recent Comments
2 Comments | Leave a Comment
Browse Our Archives
get the latest from
Catholic
Sign up for our newsletter
POPULAR AT PATHEOS Catholic
1

A Virus of a Film: A Review of...
Yesterday, I saw a movie poster circulating on Twitter. It was...
view all Catholic blogs
What Are Your Thoughts?leave a comment