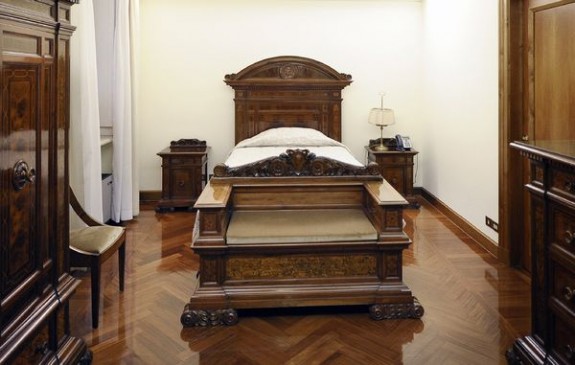 Pope Francis has revealed for the first time the reasons for his decision to shun the official papal apartments and instead live in a much more modest Vatican ‘hotel’.

He has told a friend that he likes being in daily contact with ordinary people, does not want to be isolated and enjoys sitting down to meals with visiting clergy.

The Pope, 76, who on first seeing the papal apartments reportedly exclaimed “But there is room here for 300 people!” hinted that the arrangement may be permanent.

The Pope broke with Vatican tradition when he decided, after being elected on March 13 during a secret conclave of cardinals, not to live in the apostolic apartments.

Instead he opted to remain in the Casa Santa Marta, a Vatican residence which accommodates visiting clergy and lay people, where he had stayed with his fellow cardinals during the conclave.

He lives in a suite of rooms in the residence, which sits in the shadow of St Peter’s Basilica, on the other side of the Vatican city state to the apostolic apartments.

He explained his choice in a letter written two weeks ago to an old friend, Father Enrique Martinez, a priest at the Church of the Annunciation in La Rioja.

“I didn’t want to go and live in the apostolic palace. I go over there just to work and for audiences.

“I’ve remained living in the Casa Santa Marta, which is a residence which accommodates bishops, priests and lay people.” There he feels “part of a family” he wrote in the letter, which was obtained by Clarin, an Argentinian daily.

“I’m visible to people and I lead a normal life – a public Mass in the morning, I eat in the refectory with everyone else, et cetera. All this is good for me and prevents me from being isolated.

“I’m trying to stay the same and to act as I did in Buenos Aires because if you change at my age you just look ridiculous.” The Pope, the first Jesuit pontiff in history and the first to come from the Americas, said his election was “something totally surprising” which he considers “a gift from God”.

May 29, 2013
"Parish-based Catechesis Has Been An Abject Failure"
Next Post

May 30, 2013 Ordination Update: 17 New Deacons for Brooklyn—and Most Are Latino
Browse Our Archives
Related posts from The Deacon's Bench