Bishop Thomas Paprocki of Springfield, Ill., walked into a beehive when he agreed to speak about same-sex marriage before a small audience in Phoenix over the weekend. But at least the bishop was there, taking the stings. 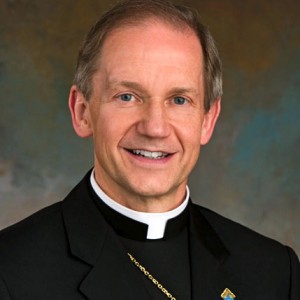 Paprocki joined Sr. Jeannine Gramick, a longtime advocate for gay and lesbian people, on the stage Friday in front of about 150 people at Shadow Rock United Church of Christ.

The presentation, organized by Robert Blair Kaiser and his group, Jesuit Alumni in Arizona, featured opening remarks from Paprocki and Gramick, then questions from the audience.

Paprocki understood he would be facing a challenging, if not hostile, audience. Recent public opinion polls have shown the majority of Catholics now support same-sex marriage…

…”This event was billed as ‘Two Catholic Views of Gay Marriage,’ ” he said. “But there is only one view that is authentically Catholic. The other view is dissenting.”

He quoted from Pope John Paul II’s letters and teachings and added that marriage is defined by “the potential to bring forth human life.”

He said if same-sex marriage is allowed, sadomasochism or other practices should be, too.

“If there is no moral truth, only alternatives, then everything should be OK,” he said.

Gramick reflected on changes in her own attitudes, attitudes of the public and attitudes of the church hierarchy. She said more and more church leaders are moving toward support of at least civil unions….

…Paprocki said the church would love to welcome gay people but is forced into a defensive position by “activists pushing an agenda.” That set off Gray, who has a gay son, again.

Paprocki said he could accept some legal protections for same-sex couples, but that same-sex marriage is “inimical to the common good” and civil unions often are marriage masquerading under another name.

Gray, an attorney, finally got her chance to address Paprocki directly.

“It is all about anecdotal stories,” she said. “My son is a perfect human being. There is nothing intrinsically disordered about him. I know because I am his mother.”

She said if bishops wanted to argue for traditional marriage because the sexes are complementary, then the bishops ought to invite women to their deliberations.

“You need to listen to mothers,” she said.

June 4, 2013 Jesus, As You've Never Seen Him Before: An Amazing Blend of Classic Art and Photoshop
Browse Our Archives
Related posts from The Deacon's Bench