Parishioners from St. Andrew Catholic Church, which has a longstanding commitment to social justice issues, will march in Sunday’s Portland Pride Parade with a banner proclaiming their parish identity, despite the wishes of Archbishop Alexander K. Sample. 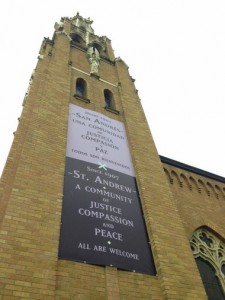 At least four Catholic parishes are expected to participate in the parade, according to the Rev. Tara Wilkins, executive director of the Community of Welcoming Congregations. Members of St. Francis of Assisi, St. Philip Neri  and St. André Bessette  (the Downtown Chapel) also are expected to march. In the past, they have carried parish banners, Wilkins said.

Monsignor Dennis O’Donovan, vicar general of the Archdiocese of Portland, called St. Andrew’s pastor, the Rev. Dave Zegar,  on May 31 on behalf of Sample, parishioners say. O’Donovan relayed the message that individuals could walk in the parade but that the archbishop did not want St. Andrew’s members to walk as a community.

Sample, who was installed as archbishop April 2, is in San Diego to attend the annual summer meeting of United States bishops, according to Bud Bunce,  spokesman for the archdiocese. He could not be reached for comment.

Bunce confirmed that O’Donovan had made the phone call. While the archdiocese respects all people, Bunce said, “this was not an event that St. Andrew’s parish could be in as a parish.”

On June 4, Zegar met with a group of St. Andrew’s parishioners, who decided to stand by their 17-year commitment to Portland’s gay community. At Mass on Sunday, Zegar shared the group’s decision with the congregation, who responded with a standing ovation, according to Tom Karwaki, who chairs the parish’s pastoral council.

June 14, 2013
Pope Francis: Establish Dialogue with All, "Even Those Who Oppress the Church"
Next Post

June 14, 2013 "Enough, Enough, Enough...": Powerful Video on the Plight of Christians in Syria
Browse Our Archives
get the latest from
Catholic
Sign up for our newsletter
POPULAR AT PATHEOS Catholic
1