From an interview with TIME magazine: 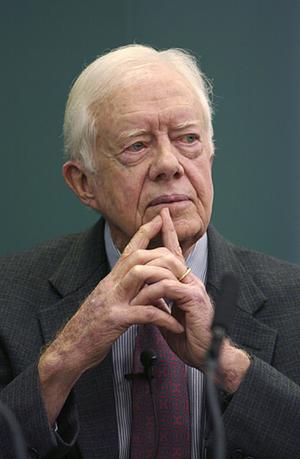 I think there’s a slow, very slow, move around the world to give women equal rights in the eyes of God. What has been the case for many centuries is that the great religions, the major religions, have discriminated against women in a very abusive fashion and set an example for the rest of society to treat women as secondary citizens. In a marriage or in the workplace or wherever, they are discriminated against. And I think the great religions have set the example for that, by ordaining, in effect, that women are not equal to men in the eyes of God.

…I think that what the major religious leaders say is used by others who discriminate against women as justification for their human rights abuse. For instance if an employer, who might be otherwise enlightened, if he is a religious person and he sees that, he might be a Catholic, and a Catholic does not let women be priests, then why should he pay his women employees an equal pay [as men]?

In the United States that prevails all over. We have an average now of about 70% that a woman earns compared to a 100% that a man earns for doing the same job. And very few of the corporate boards have I think 50% women. Very few of them. And of course we have a very few percentage of women in our House of Representatives and in our Senate. We never yet had a woman president, but I think that’s going to come in the near future. But I think in general terms this is a very derogating thing.

June 23, 2013 On Dolan's Visit to a Mosque: "The Church Regards with Esteem the Muslims..."
Browse Our Archives
get the latest from
Catholic
Sign up for our newsletter
POPULAR AT PATHEOS Catholic
1