On Dolan’s Visit to a Mosque: “The Church Regards with Esteem the Muslims…”

On Dolan’s Visit to a Mosque: “The Church Regards with Esteem the Muslims…” June 23, 2013 Deacon Greg Kandra 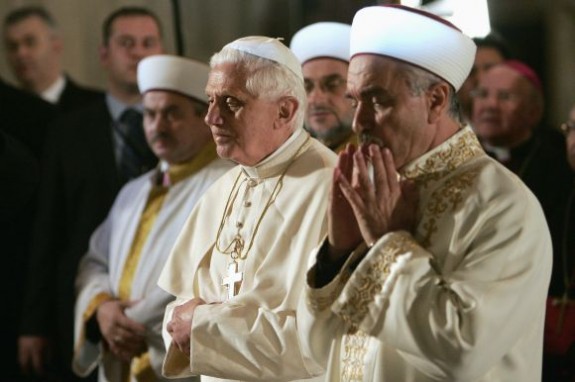 Various corners of the internets have been aswarm with critical reaction to Cardinal Timothy Dolan’s recent visit to a Staten Island mosque.

Some critics have said he was wrong to state that Muslims and Christians worship the same God; commenters have criticized him for comparing Muslims to Catholics and a few have expressed shock that he stated that he doesn’t want them to abandon their faith.  For the record: the cardinal was following in the footsteps of popes; both Pope Benedict (see above) and Blessed John Paul II  visited and prayed at mosques and had had warm words for those of the Muslim faith.

I thought it might be helpful to look at what the Church has had to say about relations with the Muslims. These writings give the cardinal’s visit context; I think they also might clear up a few misunderstandings about the Church’s relationship with other religions.

Since in the course of centuries not a few quarrels and hostilities have arisen between Christians and Moslems, this sacred synod urges all to forget the past and to work sincerely for mutual understanding and to preserve as well as to promote together for the benefit of all mankind social justice and moral welfare, as well as peace and freedom…

…As the Church has always held and holds now, Christ underwent His passion and death freely, because of the sins of men and out of infinite love, in order that all may reach salvation. It is, therefore, the burden of the Church’s preaching to proclaim the cross of Christ as the sign of God’s all-embracing love and as the fountain from which every grace flows.

From Pope Benedict’s document on the Church in the Middle East, Ecclesia in Medio Oriente:

Jews, Christians and Muslims alike believe in one God, the Creator of all men and women. May Jews, Christians and Muslims rediscover one of God’s desires, that of the unity and harmony of the human family. May Jews, Christians and Muslims find in other believers brothers and sisters to be respected and loved, and in this way, beginning in their own lands, give the beautiful witness of serenity and concord between the children of Abraham. Rather than being exploited in endless conflicts which are unjustifiable for authentic believers, the acknowledgment of one God – if lived with a pure heart – can make a powerful contribution to peace in the region and to respectful coexistence on the part of its peoples…

…The Catholic Church, in fidelity to the teachings of the Second Vatican Council, looks with esteem to Muslims, who worship God above all by prayer, almsgiving and fasting, revere Jesus as a prophet while not acknowledging his divinity, and honour Mary, his Virgin Mother. We know that the encounter of Islam and Christianity has often taken the form of doctrinal controversy. Sadly, both sides have used doctrinal differences as a pretext for justifying, in the name of religion, acts of intolerance, discrimination, marginalization and even of persecution.

Despite this fact, Christians live daily alongside Muslims in the Middle East, where their presence is neither recent nor accidental, but has a long history. As an integral part of the Middle East, Christians have developed over the centuries a type of relationship with their surroundings which can prove instructive. They have let themselves be challenged by Muslim devotion and piety, and have continued, in accordance with their means and to the extent possible, to live by and to promote the values of the Gospel in the surrounding culture. The result has been a particular form of symbiosis. It is proper, then, to acknowledge the contribution made by Jews, Christians and Muslims in the formation of a rich culture proper to the Middle East.

… Religious tolerance exists in a number of countries, but it does not have much effect since it remains limited in its field of action. There is a need to move beyond tolerance to religious freedom. Taking this step does not open the door to relativism, as some would maintain. It does not compromise belief, but rather calls for a reconsideration of the relationship between man, religion and God. It is not an attack on the “foundational truths” of belief, since, despite human and religious divergences, a ray of truth shines on all men and women. We know very well that truth, apart from God, does not exist as an autonomous reality. If it did, it would be an idol. The truth cannot unfold except in an otherness open to God, who wishes to reveal his own otherness in and through my human brothers and sisters. Hence it is not fitting to state in an exclusive way: “I possess the truth”. The truth is not possessed by anyone; it is always a gift which calls us to undertake a journey of ever closer assimilation to truth. Truth can only be known and experienced in freedom; for this reason we cannot impose truth on others; truth is disclosed only in an encounter of love.

I’d encourage anyone interested in more to visit the links and read these documents in full.

Also: a reader alerted me to a two-part examination of monotheism by Mark Shea which she found illuminating and helpful.  Check out Part 1 and Part 2.

June 23, 2013 As Catholic Schools Close, Minorities See a Lifeline Slipping Away
Browse Our Archives
get the latest from
Catholic
Sign up for our newsletter
POPULAR AT PATHEOS Catholic
1

WHAT IS 'SPIRITUALITY OF PLACE'?
The kingdom of heaven is like a treasure buried in a...
view all Catholic blogs
Copyright 2008-2020, Patheos. All rights reserved.