Pope Francis: “In this culture, let’s face it, we are the minority…”

From remarks yesterday to the Diocese of Rome:

“I’m Not Ashamed of the Gospel” was the theme of Pope Francis’ catechesis given yesterday afternoon in the Paul VI Hall for the inauguration of the Ecclesial Congress (17-19 June) that concludes the Diocese of Rome’s pastoral year. The theme of the pastoral year was: “Christ, We Need You! The Responsibility of the Baptized in Proclaiming Jesus Christ.” 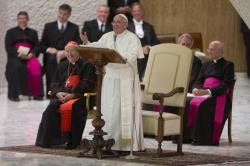 The meeting began with Cardinal Agostino Vallini, vicar general of the Diocese, greeting the Bishop of Rome. His address followed the Reading of the First Letter of St. Paul to the Romans, which contains the phrases that inspired the Pope’s catechesis: “For I am not ashamed of the Gospel. … We who were baptized … are not under the law but under grace.” Following are ample excerpts from Pope Francis’ prepared address with some of the impromptu comments he added.

“A revolution, in order to transform history, must profoundly change human hearts. Revolutions that have taken place throughout the centuries have changed political and economic systems, but non of them have truly changed the human heart. Only Jesus Christ accomplished the true revolution, the one that radically transforms life, with his Resurrection that, as Benedict XVI loves to recall, was ‘the greatest “mutation” in the history of humanity’ and it gave birth to a new world.”

The Pope …improvised: “The Gospel is for all! Going out toward the poor doesn’t mean that we must become paupers or some sort of ‘spiritual bums’! No, that’s not what it means! It means that we must go towards the flesh of the suffering Jesus but Jesus’ flesh also suffers in those who don’t know it, with their studies, their intelligence, their culture. We must go there! That’s why I like to use the expression ‘go to the outskirts’, the existential peripheries. Everyone, all of them, [who suffer] from physical and real poverty to intellectual poverty, which is also real. All the outskirts, all the intersections of paths: go there. And there sow the seed of the Gospel by word and by witness.”

“This means that we must have courage. … I want to tell you something. In the Gospel there’s that beautiful passage that tells us of the shepherd who, on returning to the sheepfold and realizing that a sheep is missing, leaves the 99 and goes to look for it, to look for the one. But, brothers and sisters, we have one. It’s the 99 who we’re missing! We have to go out, we must go to them! In this culture—let’s face it—we only have one. We are the minority. And do we feel the fervour, the apostolic zeal to go out and find the other 99? This is a big responsibility and we must ask the Lord for the grace of generosity and the courage and the patience to go out, to go out and proclaim the Gospel.”

June 19, 2013 Wow. How's THIS for a Vibrant Parish?
Browse Our Archives
Related posts from The Deacon's Bench