“The Craziest Priest in Italy” Performs During Wedding Ceremony

Well, the Anglicans have their musical quirks—and so, it seems, do we Catholics. 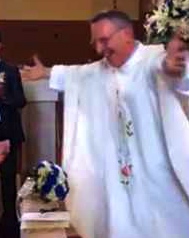 The Rev. Bruno Maggioni is making a name for himself in Italy, but it’s not for his rousing sermons.

Maggioni has begun to garner quite the following for his wedding theatrics, singing and dancing his way through ceremonies in the Italian town of Limbiate, north of Milan. During a wedding this week, the singing priest belted out 1980s pop song “Mamma Maria” from Italian group Ricchi e Poveri.

In a video posted on YouTube, Maggioni turns on a stereo and sings along to the famous song, inviting the crowd to join in. As seen in another clip shared in May, it seems the singing priest has made his “Mamma Maria” performance somewhat of a wedding routine.

Videos of Maggioni’s rendition of the 1980s hit have been widely shared in Italy, and some have taken to calling the man the “craziest priest in Italy.”

Read on to find out why he defends this stuff.  And see him in action below.