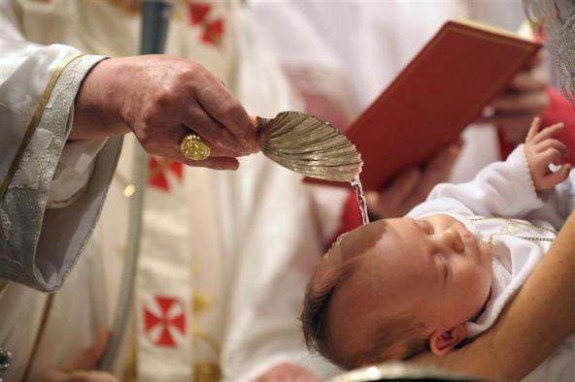 A small but significant change appears to be forthcoming, according to Sandro Magister:

The Sunday after the Epiphany is the Sunday of the baptism of Jesus. And on each of these Sundays, year after year, Benedict XVI administered the first sacrament of Christian initiation to a certain number of children, in the Sistine Chapel.

Each time, therefore, he had occasion to pronounce the formulas supplied by the rite of baptism in effect since 1969. But two of the words in this rite never entirely convinced him.

And so, before renouncing the chair of Peter, he ordered that they should be changed in the original Latin, and as a result in the modern languages as well.

The provision, which was worked up by the congregation for divine worship and the discipline of the sacraments, was published in the official bulletin of the dicastery, “Notitiae.” Its existence was pointed out, amid the silence of the Vatican media, by the newspaper of the Italian episcopal conference, “Avvenire.”

The decree that introduces the innovation, published in Latin, begins as follows:

“The gate of life and of the kingdom, baptism is a sacrament of faith, by which men are incorporated into the one Church of Christ, which subsists in the Catholic Church, governed by the successor of Peter and by the bishops in communion with him.”

It is precisely on the basis of this consideration that the congregation for divine worship and discipline of the sacraments justified the variation in the second Latin “editio typica” of the 1973 rite for the baptism of children (which in the formula in question is identical to the first “editio typica” of 1969):

“So that in this same rite more light may be shed on the doctrinal teaching of the task and duty of Mother Church in the sacraments to be celebrated.”

The variation introduced is the following.

In practice pope Joseph Ratzinger, as a sophisticated theologian, wanted that in the baptismal rite it should be clearly said that it is the Church of God – which subsists fully in the Catholic Church – that receives those who are being baptized, and not generically the “Christian community,” a term that also signifies the individual local communities or non-Catholic confessions, like the Protestants.

The decree published in “Notitiae” specifies that Benedict XVI “benevolently established” the aforementioned variation in the course of an audience granted to the prefect of the congregation, Cardinal Antonio Cañizares Llovera, on January 28, 2013, just two weeks before the announcement of his resignation as pope.

The decree bears the date of February 22, 2013, the feast of the chair of St. Peter, and is signed by the cardinal prefect and by the secretary, Archbishop Arthur Roche. And it is said there that it went into effect on March 31, 2013, already under the reign of Pope was Francis, who evidently had nothing to object with regard to the decision of his predecessor.

The introduction of the variation in the modern languages will be overseen by the respective episcopal conferences.

August 22, 2013 How long should homilies be?
Browse Our Archives
Related posts from The Deacon's Bench