After couple cancels wedding plans, bride’s family turns reception into a dinner for the homeless 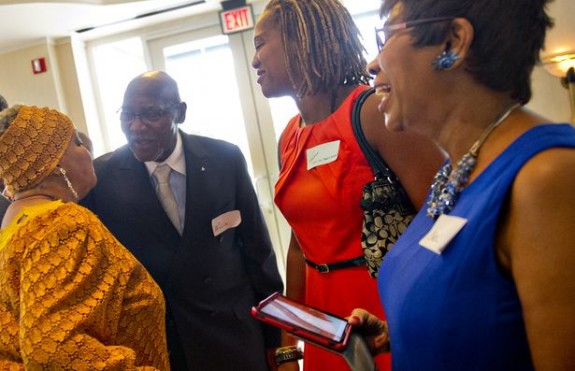 I love this story:

Carol and Willie Fowler teamed up with Hosea Feed the Hungry, a local organization serving families in need, to turn the wedding-that-wasn’t into the first annual Fowler Family Celebration of Love, feeding 200 unexpected guests.

“We’re very pleased that she’s handling it so well,” Carol Fowler told Here & Now about her daughter. “She was also very delighted to see and know that others had an opportunity to enjoy something, rather than just allow it to go to waste.”

Elizabeth Omilami, head of Hosea Feed the Hungry, told Here & Now that the children who attended the event will never forget it.

“The passed hors d’oeuvre were very interesting because the children were wondering, ‘could we take the whole tray, or do we just take one off of the tray?’” Omilami said. “So this was an educational opportunity as well, because now they all know how to eat at a four-course meal and the etiquette involved in that.”

From an interview with the mother of the not-a-bride:

YOUNG: Carol, we don’t want to pry, but we know that it was your daughter Tamara, who actually went to the reception that is now – that was now for the homeless in the Atlanta area – who was part of a wedding that was called off. Was this a shock to you, the parent, when this happened?

FOWLER: Yes, we were surprised and we’re very pleased that she’s handling it so well.

YOUNG: I should say so. I mean, going to…

YOUNG: Going to a reception that was going to be for her, and now it’s for 200 strangers.

FOWLER: Yes, and she was also very delighted to see and know that others had an opportunity to enjoy something rather than just allow it to go to waste.

YOUNG: Yeah. Well, but here you are, the parent, and along with your husband, Willie Fowler, I only imagine this was costing thousands. You had 200 guests, beautiful place settings and just seemed like a wonderful hall. You could’ve had 200 of your friends. You could’ve had the friends who were invited still come and feed them. When was the decision made to give this meal to the homeless?

FOWLER: Forty days prior to the wedding when we were made aware that there would no longer be a wedding. It was my husband’s idea. We prayed about it. And when he woke up the next morning, he said, we’re going to call Hosea Feed the Hungry and ask if we can donate it to the needy. I immediately looked up the number and called and spoke with Mrs. Elisabeth Omilami, and in doing so, we partnered. And it was such a wonderful feeling just to partner with them.