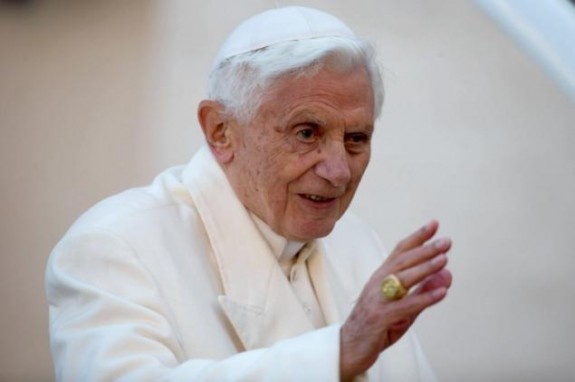 In a letter to an atheist Italian mathematician, retired Pope Benedict XVI defended his own handling of allegations of the sexual abuse of minors by clergy and politely criticized the logician’s total reliance on scientific facts for meaning.

“I never sought to conceal these things,” the pope said of cases of clerical abuse, and lamented the scholar depicting the church as the only place where such “deviation” and “filth” occur.

The publication of the retired pope’s comments Sept. 24 to an atheist scholar came the same month a written letter by Pope Francis to an Italian journalist concerning dialogue with nonbelievers was published. Both letters were published, with the two popes’ permission, by the Italian daily La Repubblica.

The paper released long excerpts of Pope Benedict’s original 11-page response to Piergiorgio Odifreddi, a prolific science writer who authored the book, “Dear Pope, I Write to You” in 2011. The book, presented as a letter to Pope Benedict, proposes the superiority of a worldview in which belief should stem only from things that can be understood and empirically known over worldviews that include belief in things that cannot be fully understood or known.

The pope’s response, dated Aug. 30, thanked Odifreddi for seeking to juxtapose his ideas against the pope’s own writings “and, thus, with my faith.”

The pope, who has long engaged in dialogue with nonbelievers, most notably with his “Courtyard of the Gentiles” initiative and his 2011 Assisi gathering, said he appreciated Odifreddi’s efforts to engage in a frank and open dialogue with the Catholic faith.

However, the pope said he met “with deep dismay” Odifreddi’s unspecified comments about the clerical abuse scandals.

The pope, who was the first pontiff to meet with abuse victims, had spoken out forcefully against “the filth” in the church, clarified church laws to expedite cases, and mandated bishops’ conferences put in place stringent norms against abuse, among a number of other initiatives.

In his letter, the pope said he never tried to cover up allegations.

“That the power of evil seeps all the way into the inner world of the faith is a source of suffering for us.” Not only must the church bear the burden of this evil, but it also must “do everything possible so that such cases never repeat themselves,” he wrote.

September 24, 2013
After couple cancels wedding plans, bride's family turns reception into a dinner for the homeless
Next Post

September 24, 2013 Is there room for someone like Sarah in the Church?
Browse Our Archives
Related posts from The Deacon's Bench