The pope makes his mark in Newark, “the first truly Francis appointment” 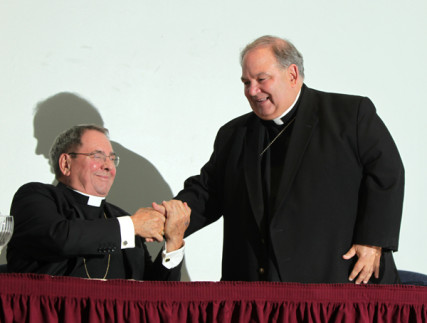 And what is happening in Newark may be telling.  Rocco has everything you need to know,with some wide-ranging analysis:

For all the smiles at the cameras and talk of a smooth transition, the difference between Newark Catholicism’s present and future can be boiled down to this: while John Myers prefers to be addressed as “His Grace” – the British/Canadian style for archbishops – whatever title his successor might be saddled with, the next metropolitan of New Jersey will forever be known to all as, simply, “Bernie.”

The mottoes are instructive, too: the incumbent chose for himself the refined, maybe even esoteric “Mysterium ecclesiae luceat” (“Let the mystery of the church shine forth”), a reference to the Vatican II constitution Lumen Gentium. His coadjutor’s is straightforward and in English – two words: “Only Jesus.”

Shot into the stratosphere as shepherd-in-waiting of the nation’s ninth-largest diocese, Bernie Hebda’s ascent to North Jersey has been described as “the first truly Francis appointment” on these shores: a distinctly pastoral, nonideological figure with a penchant for sharp ideas, hard work, close ties and creating oceans of goodwill across all sorts of divides…

…The move for a Newark coadjutor is significant on numerous fronts: beyond representing Francis’ most consequential US personnel-choice to date – both in terms of the archdiocese’s size and Rome’s tackling of a high-visibility crisis situation – the speed of the appointment represents a marked shift from prior practice. Instead of the standard months-long search process, the first indications that Myers would receive an early successor only began circulating within the last month, reflecting the case’s priority as well as the new Pope’s willingness to move quickly, guided by the advice of his own channels.

September 25, 2013 "How many of you pray for Christians who are persecuted?"
Browse Our Archives
get the latest from
Catholic
Sign up for our newsletter
POPULAR AT PATHEOS Catholic
1