The pope speaks—and the whole world is listening 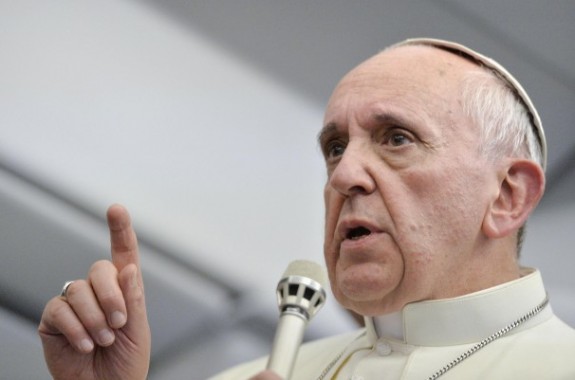 This is truly remarkable: an extended and exclusive interview published today in AMERICA.

In the introduction, the editors note:

This interview with Pope Francis took place over the course of three meetings during August 2013 in Rome. The interview was conducted in person by Antonio Spadaro, S.J., editor in chief of La Civiltà Cattolica, the Italian Jesuit journal. Father Spadaro conducted the interview on behalf of La Civiltà Cattolica, America and several other major Jesuit journals around the world. The editorial teams at each of the journals prepared questions and sent them to Father Spadaro, who then consolidated and organized them. The interview was conducted in Italian. After the Italian text was officially approved,America commissioned a team of five independent experts to translate it into English. America is solely responsible for the accuracy of this translation. This interview is copyrighted by America Press and cannot be used, except for brief quotations, without written permission.

Father Spadaro met the pope at the Vatican in the pope’s apartments in the Casa Santa Marta, where he has chosen to live since his election.

There is much to absorb here about a wide range of topics.  Read the entire conversation.

From the Associated Press write thru:

Pope Francis has warned that the Catholic Church’s moral structure might “fall like a house of cards” if it doesn’t balance its divisive rules about abortion, gays and contraception with the greater need to make it a merciful, more welcoming place for all.

Six months into his papacy, Francis set out his vision for the church and his priorities as pope in a lengthy and remarkably blunt interview with La Civilta Cattolica, the Italian Jesuit magazine. It was published simultaneously Thursday in Jesuit journals in 16 countries, including America magazine in the U.S.

In the 12,000-word article, Francis expands on his ground-breaking comments over the summer about gays and acknowledges some of his own faults. He sheds light on his favorite composers, artists, authors and films (Mozart, Caravaggio, Dostoevsky and Fellini’s “La Strada”) and says he prays even while at the dentist’s office.

But his vision of what the church should be stands out, primarily because it contrasts so sharply with many of the priorities of his immediate predecessors, John Paul II and Benedict XVI. They were both intellectuals for whom doctrine was paramount, an orientation that guided the selection of a generation of bishops and cardinals around the globe.

Francis said the dogmatic and the moral teachings of the church were not all equivalent.

“The church’s pastoral ministry cannot be obsessed with the transmission of a disjointed multitude of doctrines to be imposed insistently,” Francis said. “We have to find a new balance; otherwise even the moral edifice of the church is likely to fall like a house of cards, losing the freshness and fragrance of the Gospel.”

Rather, he said, the Catholic Church must be like a “field hospital after battle,” healing the wounds of its faithful and going out to find those who have been hurt, excluded or have fallen away.

“It is useless to ask a seriously injured person if he has high cholesterol and about the level of his blood sugars!” Francis said. “You have to heal his wounds. Then we can talk about everything else.”

“The church sometimes has locked itself up in small things, in small-minded rules,” he lamented. “The most important thing is the first proclamation: Jesus Christ has saved you. And the ministers of the church must be ministers of mercy above all.”

The admonition is likely to have sharp reverberations in the United States, where some bishops have already publicly voiced dismay that Francis hasn’t hammered home church teaching on abortion, contraception and homosexuality — areas of the culture wars where U.S. bishops often put themselves on the front lines. U.S. bishops were also behind Benedict’s crackdown on American nuns, who were accused of letting doctrine take a backseat to their social justice work caring for the poor — precisely the priority that Francis is endorsing.

Also writing about this:

I think Sam sums it up well:

Please, don’t read it for melodrama or controversy: read for what is there, no more and no less. Grab a cup of coffee and sit down for a few minutes to hear what Pope Francis — the man of flesh and bone — has to say. Breathe. Think. Ponder. Question. Imagine. Check. Double-check. Set it aside. Repeat. Then, and only then, perhaps, express an opinion or a point of view, with charity. Resist the temptation to objectify, politicize, and use the Pope’s words, given in a pastoral spirit.

Elsewhere, a Commonweal editor described the interview as “head-exploding.”

If you’re so inclined, it might be wise to read the interview with a bucket and paper towels nearby.

UPDATE: Newshounds, take note. As of 3:30 Thursday afternoon, the pope’s interview was the lead story in the New York Times, CNN, CBS ,the Washington Post and the BBC.

An observation: timing is everything. I can’t help but think it’s not a coincidence that this story is moving just ahead of the pope’s landmark meeting with the “Super 8” in Assisi on October 4th.

September 19, 2013
Priest appointed to investigate cause for Chesterton sainthood
Next Post