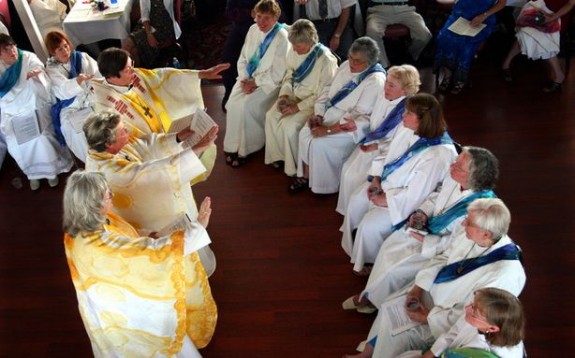 They ignore all the other demands of the Church, so why not that one, too?

The Roman Catholic Womenpriests gained their 121st American member on Saturday, when candidate Ann Poelking Klonowski was ordained as a priest in Brecksville, Ohio — not that the Catholic Church recognizes the ceremony. Canon law 1024 states explicitly that “a baptized male alone receives sacred ordination validly.” In May 2008, Pope Benedict XVI, then a bishop, declared involvement with the Womenpriests a reason for automatic excommunication.

The Womenpriests, who have 145 women members worldwide, don’t let the canon law bother them. “It doesn’t have any meaning because no one really pays attention to it,” Suzanne A. Thiel, a representative of the organization and one of the ordained, told The Atlantic Wire. “I think most of us just ignore it.” The first ordinations performed by the Womenpriests occurred in 2002, when a male bishop ordained seven women in Germany’s Danube River. The organization argues that their ordinations are legitimate due to apostolic succession — basically, the male bishop who ordained the original womenbishops gave them the ability to ordain others. Thiel called their work illicit, but valid.

It’s possible to ignore canon laws, but not excommunication. Jennifer O’Malley was ordained as a priest in Los Angeles earlier this year, and said that she was “really grieved about not being able to be buried in a Catholic cemetery. That was sort of the ultimate exclusion.” At the same time, she described her rebellion against the Church as following God’s will….

…When people say the Womenpriests operate outside of “The Church,” she argues that it depends on your definition of the Church. “Are you looking at the Church as the Vatican, the Pope, the hierarchy, or are you looking at it as the people?” Thiel said.

Priests Never Say They're Sorry
The month of June began with being told I had no dignity....
view all Catholic blogs
Copyright 2008-2021, Patheos. All rights reserved.
Close Ad