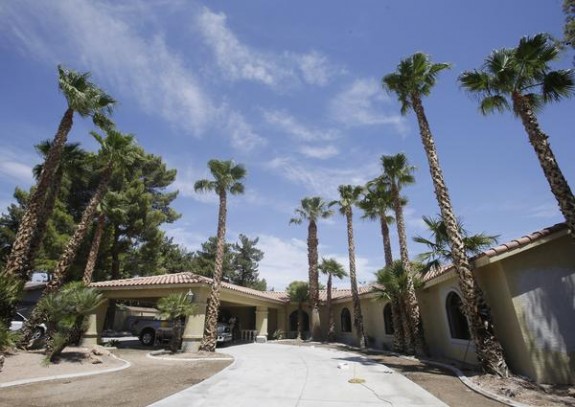 And now for something completely different, from the business pages of the Los Angeles Times:

They came to the Las Vegas mansion in waves, chasing tales of ghosts and murder. Some came to gawk or snap photos in front of its black metal gate. Others came to worship Satan. Thrill seekers broke in and drew pentagrams and carved upside-down crosses throughout the house.

The vandals came after “Ghost Adventures” featured the mansion on an episode that warned of a “nasty, evil spirit” that lurked inside. The homeowner fumed and sued. He wanted the Travel Channel show to pay damages.But how do you calculate the effect that demons have on property value?

The 54-year-old Laguna Beach resident is a doom-and-gloom real estate appraiser. He has carved out a singular niche, fielding calls from governments, big businesses, crime victims and international media, all seeking insight into the worth of stigmatized properties.

Bell recently estimated the financial toll that the mansion’s owner, Keith Resnick, alleges that “Ghost Adventures” inflicted on his house, which is in a posh neighborhood in sight of the Stratosphere hotel. During one of his visits last year, Bell went from room to room, surveying the vandalism.

He pondered the lost value from the perception — created by the show — that mobsters had carried out executions here.

The fire damage, crumbling stucco and repeated break-ins after the show aired in 2010 meant that his client would lose a lot of money in selling the house he had once planned to live in. For Bell, it was yet another case in a long, strange career.

“I love a challenge — the biggest, baddest, bring it on,” Bell says. “Every day of the week, there are new places to go and new disasters.”

October 9, 2013 Pope Francis on what it means to be "catholic"
Browse Our Archives
Related posts from The Deacon's Bench