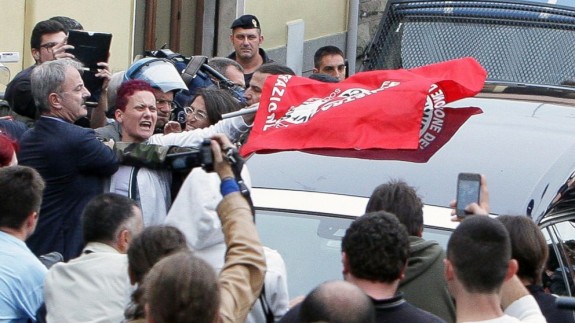 Shouting “murderer” and “executioner,” hundreds of people jeered as the coffin of Nazi war criminal Erich Priebke arrived Tuesday for a funeral Mass celebrated by a splinter Catholic group opposed to the Vatican’s outreach to Jews.

Since Priebke’s death on Friday at age 100, debate has raged over what to do with his remains. Pope Francis’ vicar for Rome refused him a funeral in a Catholic Church and Rome’s police chief backed him up, citing concerns for public order.

Priebke participated in one of the worst massacres in German-occupied Italy during World War II, the slaughter of 335 civilians at the Ardeatine Caves outside Rome. Tensions have been high ever since he died and left behind an interview in which he denied Jews were gassed in the Holocaust.

No one appeared ready to handle his service, until, in a surreal twist, the schismatic Society of St. Pius X in the city of Albano Laziale south of Rome stepped forward to celebrate the funeral Mass. The society, known for the anti-Semitic views of some of its members, celebrates the pre-Vatican II old Latin Mass. Where he will be buried remains unresolved.

As the hearse bringing the coffin arrived outside the society’s walled compound, people in the crowd slammed their fists and umbrellas on the car and shouted “We are all anti-fascist!” and “Priebke, murderer!”

Later, at least 50 Priebke supporters gathered and were being held back by riot police about 500 meters (yards) away.

The society was formed in 1969, opposed to the modernizing reforms of the Second Vatican Council, particularly its outreach to Jews. It split from Rome after its leader consecrated bishops without papal consent. It currently has no legal standing in the Catholic Church.

One of its disgraced members is Bishop Richard Williamson, who made headlines in 2009 when he denied that any Jews were killed in gas chambers during the Holocaust.

Priebke espoused the same views. In a final interview released by his lawyer upon his death, Priebke denied the Nazis gassed Jews and accused the West of inventing such crimes to cover up atrocities committed by the Allies during World War II.

UPDATE: A couple people have pointed out that the priest who celebrated the funeral Mass was, in fact, kicked out of SSPX some time ago.

The Diocese of Rome said in a statement that Priebke’s lawyer was asked to hold a “small, private” funeral in the Nazi war criminal’s home rather than in a church.

“The prayer for the deceased was not denied,” the diocese said in a statement, “but rather a different manner for the ceremony was decided.” Pope Francis is the titular head of the Rome diocese but has little involvement in its daily affairs.

Priebke’s lawyer rejected that proposition, according to the diocese.

Instead, the conservative Society of St. Pius X stepped in, agreeing on Tuesday to hold a funeral Mass in their church for the former Nazi. The society has no official status within the Catholic Church.

The Italian chapter acknowledged in a statement Tuesday that Priebke was “controversial” but said he had already been convicted by Italian courts and has the right to a Christian funeral.

“A Christian who has been baptized and who has received the sacraments of the Confession and the Eucharist, regardless of what have been his crimes and sins, as he dies reconciling with God and with the Church has the right to have a Holy Mass celebrated at his funeral,” the group said in a statement.

The society also said that it “reaffirms our repudiation to any form of anti-semitism and racial hatred.”

UPDATE II: Reports indicate the funeral was eventually called off:

The funeral of Nazi war criminal Erich Priebke had to be abandoned in Italy last night after right-wing sympathisers clashed with protesters.

As Priebke’s coffin arrived for a funeral Mass, hundreds of people mobbed the hearse shouting “murderer” and “executioner”.

With no Catholic church in Rome allowed to house the service, it was eventually taken on by a splinter Catholic group that opposes the Vatican’s outreach to Jews.

Protesters even targeted a priest arriving at the gates, shouting “shame” and rushing police lines.

Priebke’s lawyer, Paolo Giachini, said the funeral did not take place “because authorities did not allow people to enter who wanted to come in. Everything was ready. We were waiting for those who should have arrived to participate.”

The question turned today to what will be done with the body, with both Priebke’s hometown in Germany and his home for fifty years in Argentina refusing to take him.

October 16, 2013 What a story: orphan goes to church in search of a family to adopt him
Browse Our Archives
Related posts from The Deacon's Bench