Who was the famous cardinal who strongly opposed restoring the permanent diaconate?

Who was the famous cardinal who strongly opposed restoring the permanent diaconate? October 5, 2013 Deacon Greg Kandra 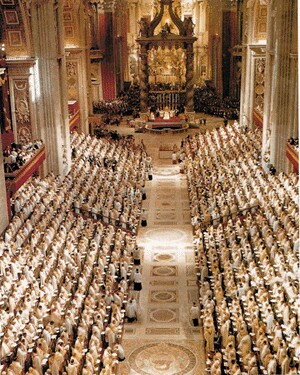 Catholic News Service offers the answer in this flashback from its coverage of Vatican II 50 years ago:

Francis Cardinal Spellman, Archbishop of New York, strongly criticized a proposal to bring back a permanent diaconate to the Catholic Church as the ecumenical council entered discussion on the second chapter of the proposal “On the Nature of the Church.”

Cardinal Spellman objected to a provision in the schema which would abolish the present Church law which
requires that the diaconate be conferred on no one unless he intends to continue on toward priesthood.

In the sacrament of Holy Orders, there are seven steps: four minor orders (porter, lector, exorcist and acolyte) and three major orders (subdeacon, deacon and priest). In the early Church, the diaconate was an order to which a man could aspire without intending to go on to the priesthood. St. Francis of Assisi, for example, was a deacon but never a priest. But in relatively recent Church legislation, the diaconate has been restricted only to those who intend to be priests. 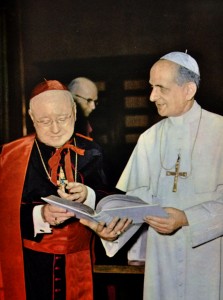 In recent years, some have asked that the permanent status of diaconate be restored. This has been particularly urged by missionary bishops who want to use the diaconate to help the overworked missionary priests.

In the later half of the council’s 41st general meeting, after discussion on the schema’s first chapter ended and discussion on the second chapter opened, Cardinal Spellman addressed the assembly and expressed surprise that the text should propose establishing the diaconate.

This is a disciplinary measure, he said, first of all, which has no place in a dogmatic constitution. There is even some doubt, he added, as to whether it should be discussed at all. With the passage of time, the diaconate as a stable rank in the hierarchy has become obsolete and for this reason no steps should be taken to restore it to its previous form without careful consideration of the reasons which led to the original change.

The Cardinal noted what he considers practical difficulties which stand in the way of restoring the permanent diaconate. Permanent deacons would need special preparation, and this would mean organizing special houses for training. This necessity could inflict grave hardships in localities where the Church already finds it difficult to maintain seminaries. There is the further thought that vocations to the priesthood might diminish, especially if permanent deacons were not bound by the law of celibacy.

October 6, 2013 Restaurant that created "communion burger" donates to Catholic Charities
Browse Our Archives
get the latest from
Catholic
Sign up for our newsletter
POPULAR AT PATHEOS Catholic
1