Pope Francis: “Many people make human sacrifices and there are laws that protect them…”

Pope Francis: “Many people make human sacrifices and there are laws that protect them…” November 18, 2013 Deacon Greg Kandra

From his homily today:

Pope Francis warned the faithful against what he described as a “globalized uniformity” which is the result of secular worldliness.Often he said, the people of God prefer to distance themselves from the Lord in favour of worldly proposals. He said worldliness is the root of evil and it can lead us to abandon our traditions and negotiate our loyalty to God who is always faithful. This – the Pope admonished – is called apostasy, which he said is a form of “adultery” which takes place when we negotiate the essence of our being: loyalty to the Lord. 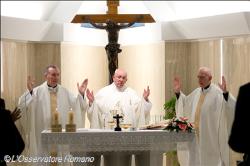 And he spoke of the contradiction that is inherent in the fact that we are not ready to negotiate values, but we negotiate loyalty. This attitude – he said – “is a fruit of the devil who makes his way forward with the spirit of secular worldliness”.And referring again to the passage in the Book of Maccabees, in which all nations conformed to the king’s decree and adopted customs foreign to their culture, the Pope pointed out that this “is not the beautiful globalization, unity of all nations, each with their own customs but united, but the uniformity of hegemonic globalization, it is – he said – the single thought: the result of secular worldliness”

And Pope Francis warned that this happens today. Moved by the spirit of worldliness, people negotiate their fidelity to the Lord, they negotiate their identity, and they negotiate their belonging to a people that God loves. And with a reference to the 20th century novel “Lord of the World” that focuses on the spirit of worldliness that leads to apostasy, Pope Francis warned against the desire to “be like everyone else” and what he called an “adolescent progressivism”. “What do you think?” – he said bitterly – “that today human sacrifices are not made? Many, many people make human sacrifices and there are laws that protect them”.

Could it be that we are making human sacrifices because we worship Strange Gods?

November 18, 2013 Ordination update: 15 new deacons for Oakland
Browse Our Archives
get the latest from
Catholic
Sign up for our newsletter
POPULAR AT PATHEOS Catholic
1