Whatsoever you do: homeless man lies dead on street for day, while people pass by and take pictures

Whatsoever you do: homeless man lies dead on street for day, while people pass by and take pictures November 3, 2013 Deacon Greg Kandra 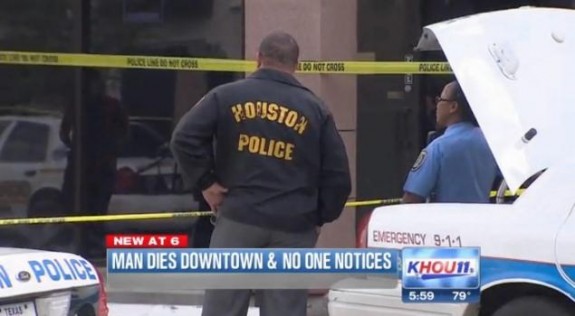 A homeless man lay dead in a busy downtown Houston street for nearly a day as people took snaps of his corpse on their cellphones, cops say.

The pantsless body of the vagrant, known as “Big Guy,” was left unattended on the corner of Travis and Anita streets for more than 20 hours Monday as hundreds of workers walked by.

Cops claim that passersby believed the man was just sleeping and that no one had noticed he was dead. That was despite one walker even stopping to put a sweater over him.

It led Houston Police Department Sgt. Brian Harris to slam all those who failed to help someone who was clearly in need.

“If they just had used their cellphone to make a call instead of a picture, perhaps this man could still be alive today,” he told KHOU.

November 3, 2013 Did they do this at your church for All Souls?
Browse Our Archives
get the latest from
Catholic
Sign up for our newsletter
POPULAR AT PATHEOS Catholic
1