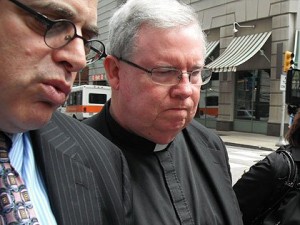 A Pennsylvania appeals court has ruled that a Roman Catholic Church official was wrongly convicted for his handling of priest sex-abuse complaints.

The unanimous decision released Thursday by the state Superior Court also dismisses the criminal case against Monsignor William Lynn, a Philadelphia area priest. Lynn has been serving three to six years in prison after his child-endangerment conviction last year.

Prosecutors had argued that Lynn reassigned predators to new parishes in Philadelphia when he was secretary for clergy from 1992 to 2004. Lynn’s conviction stems from the case of one priest, Edward Avery, found to have abused a child after such a transfer.

The superior court has ordered him to be released forthwith,’ his defense lawyer, Thomas Bergstrom, said

Bergstrom notes that the unanimous decision from Pennsylvania Superior Court reverses the child-endangerment conviction, saying the statute did not apply to him:

Bergstrom contended the state’s child-endangerment law at the time applied only to parents and caregivers, not supervisors like Lynn.

Lynn served as secretary for clergy from 1992 to 2004. Bergstrom says the Monsignor would like to fulfill an assignment with the church, but that will be up to the Archbishop.

You may remember that when his sentence was handed down last year, Msgr. Lynn became the highest-ranking member of the clergy at the time to be convicted of covering up sex abuse.

The 12-member jury acquitted Monsignor Lynn, of the Archdiocese of Philadelphia, of conspiracy and a second count of endangerment after a trial that prosecutors and victims rights groups called a turning point in the abuse scandals that have shaken the Catholic Church.

The single guilty verdict was widely seen as a victory for the district attorney’s office, which has been investigating the archdiocese aggressively since 2002, and it was hailed by victim advocates who have argued for years that senior church officials should be held accountable for concealing evidence and transferring predatory priests to unwary parishes.

Monsignor Lynn, 61, sat impassively as the jury foreman announced the verdicts, but relatives behind him were in tears. Judge M. Teresa Sarmina of the Common Pleas Court revoked his bail, and the monsignor stood up, removed his clerical jacket and was led by sheriff’s deputies to a holding cell area. His conviction, on the 13th day of deliberations, could result in a prison term of three-and-a-half to seven years; sentencing is set for Aug. 13.

The trial sent a sobering message to church officials and others overseeing children around the country. “I think that bishops and chancery officials understand that they will no longer get a pass on these types of crimes,” said Nicholas P. Cafardi, a professor of law at Duquesne University, a canon lawyer and frequent church adviser. “Priests who sexually abuse youngsters and the chancery officials who enabled it can expect criminal prosecution.”

The three-month trial cast a harsh light on the top leadership of the archdiocese, especially Cardinal Anthony J. Bevilacqua, whom Monsignor Lynn advised. Archbishop of Philadelphia from 1988 to 2003, he died in January, but his name was invoked frequently during the testimony. Monsignor Lynn’s own lawyer told the jury that “in this trial, you have seen the dark side of the church.”

December 26, 2013 A pastor's investment: give each parishioner $50—and a challenge
Browse Our Archives
get the latest from
Catholic
Sign up for our newsletter
POPULAR AT PATHEOS Catholic
1

WHAT IS 'SPIRITUALITY OF PLACE'?
The kingdom of heaven is like a treasure buried in a...
view all Catholic blogs
Copyright 2008-2020, Patheos. All rights reserved.