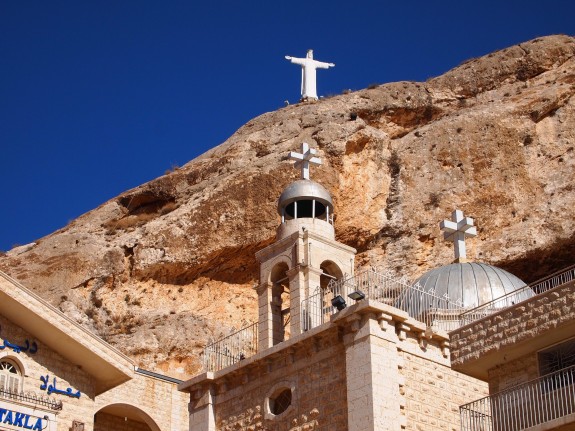 The Syrian Greek-Catholic Church has three “true martyrs”. They are the “three men from Maaloula who refused to repudiate their faith,” and were killed for this reason, said Patriarch Gregory III Laham during his meeting with Pope Francis on Sunday, this according to a press release issued by the Catholic Patriarchate of Antioch and All the East, of Alexandria and Jerusalem of the Melkites.

The events that led to the three men’s death occurred during fighting on 3 -7 September in the town of Maaloula.

According to eyewitness accounts, men from the Syrian Free Army and the Jabhat al-Nusra Islamic Front carried out a coordinated attack in order to take control of Maaloula.

When the town fell, a climate of fear was imposed, witnesses said. When three men refused to repudiate their religion, they were summarily executed in public, and six more were taken hostage. This was followed by a failed attempt by Syrian government forces to retake the town.

“You,” Gregorios III told the pope, “spoke to us, asking us not to let the flame of hope die in our hearts . . . . We want to be martyrs on this earth, martyrs in blood, as was the case for some of our faithful, including the three men from Maaloula: Michel Thalab, Mtanios Thalab and Sarkis Zachem.”

“Holy Father, they are true martyrs. Ordered to give up their faith, they proudly refused. Three others however gave in and were forced to declare themselves Muslim, but later returned to the faith of their ancestors.”

According to what the families who fled from Maaloula had to say, some of their Muslim neighbours took part in the attack that devastated this historic village where people still speak Aramaic, the language of Jesus. Muslims are approximately one third of the population of the village, which is about 50 kilometres from Damascus.

“Our Church, which you love, today is a church in distress,” the Patriarch said. “For this church, which is facing an unprecedented situation in its history, you are Simon of Cyrene, who carried the cross.”

December 4, 2013
Obama quotes the pope in economic address
Next Post

December 5, 2013 Breakthrough: an artificial hand that feels
Browse Our Archives
get the latest from
Catholic
Sign up for our newsletter
POPULAR AT PATHEOS Catholic
1