Breakthrough: an artificial hand that feels 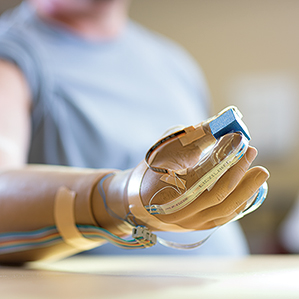 Fascinating stuff.  This holds out hope for thousands who have lost limbs:

There have been remarkable mechanical advances in prosthetic limbs in recent years, including rewiring nerve fibers to control sophisticated mechanical arms (see “A Lifelike Prosthetic Arm”), and brain interfaces that allow for complicated thought control (see “Brain Helps Quadriplegics Move Robotic Arms with Their Thoughts”). But for all this progress, prosthetic limbs cannot send back sensory information to the wearer, making it harder for them to do tasks like pick up objects without crushing them or losing their grip.

Now researchers at the Cleveland Veterans Affairs Medical Center and Case Western Reserve University have developed a new kind of interface that can convey a sense of touch from 20 spots on a prosthetic hand. It does this by directly stimulating nerve bundles—known as peripheral nerves—in the arms of patients; two people have so far been fitted with the interface. What’s more, the implants continue to work after 18 months, a noteworthy milestone given that electrical interfaces to nerve tissue can gradually degrade in performance.

A video produced several weeks ago shows a 48-year-old Ohio man who lost his right hand in an accident three years ago using his prosthetic hand to pick up and remove stems from cherries without crushing them from excessive squeezing. This was thanks to the new technology, which allowed force detectors on the digits of his prosthetic hand to convey touch information directly to three pea-sized nerve interfaces surgically implanted in his lower right arm. He controls the hand through a standard technology called a myoelectric interface, which uses signals from the muscles in his lower arm to govern prosthetic hand movements.

The work opens up the possibility that prosthetic limbs could one day provide enduring and nuanced feedback to humans, says Dustin Tyler, the Case Western professor behind the project.

December 5, 2013 Boston Globe: Francis giving other faiths "pope envy"
Browse Our Archives
get the latest from
Catholic
Sign up for our newsletter
POPULAR AT PATHEOS Catholic
1