What will Pope Francis do with the Legion of Christ?

What will Pope Francis do with the Legion of Christ? December 13, 2013 Deacon Greg Kandra

First, one of the Legion of Christ’s top officials abruptly quit the troubled religious order in frustration over the slow pace of change. Then priests in the cult-like movement empowered proteges and associates of the order’s disgraced founder, the Rev. Marcial Maciel, to vote for their next leader. 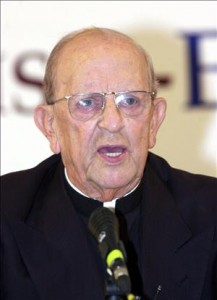 The past month has seen some setbacks the Legion’s efforts to rehabilitate itself as it moves toward electing a new leadership next month, the culmination of a three-year Vatican experiment aiming to overhaul a damaged order. Yet even as the Legion prepares to present a new face, high-ranking members continue to speak nostalgically and even reverently of Maciel — a sexual predator who molested his seminarians, fathered three children and was, in the words of Vatican-appointed investigators, “devoid of scruples and authentic religious meaning.”

It all means that hopes are dwindling that the Vatican’s effort to radically reform the Legion has succeeded, raising the question of what Pope Francis will do with the once-powerful and wealthy order after the mandate of the papal envoy running it expires.

Francis’ predecessor, Benedict XVI, took over the Legion in 2010 and appointed a Vatican cardinal to govern it after investigators determined that the congregation itself needed to be “purified” of Maciel’s influence. In reality, the Vatican knew well of Maciel’s crimes for decades but turned a blind eye, impressed instead by his ability to bring millions of dollars and thousands of seminarians into to the church.

Rome’s failure to stop him marks the most egregious case of its indifference to victims of priestly sexual abuse, and has tarnished the legacy of Pope John Paul II, soon to be canonized, because he had held up the Legion as a model for the faithful.

To be sure, some progress has been made during the past three years of Vatican receivership: The order rewrote its constitutions, released statistics about sex abuse cases, and a well-respected priest recently begged forgiveness from Maciel’s victims for how he and the Legion ignored and defamed them. But if recent elections in the Legion’s consecrated lay branches are any indication, the membership itself has voted for the status quo.

That mindset has driven dozens of disillusioned priests and hundreds of seminarians and consecrated members out of the order: On Saturday, the Legion will ordain 31 new priests, half as many as were ordained just three years ago.

December 13, 2013 "The scandal of preaching"
Browse Our Archives
get the latest from
Catholic
Sign up for our newsletter
POPULAR AT PATHEOS Catholic
1