“The scandal of preaching”

Pope Francis celebrated Mass in the chapel of the Domus Sanctae Marthae residence in the Vatican this Friday morning, focusing his remarks on the attitude of some Christians who seem to be “allergic” to preachers and overly critical of those who proclaim the Gospel, suggesting that they are often afraid of letting the Holy Spirit into their lives and are therefore prone to profound sadness. 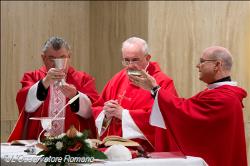 In his remarks to the faithful following the readings of the day, Pope Francis focused on the day’s Gospel, drawn from that according to St Matthew (11:16-19). There, Jesus compares the generation of his time to always unhappy children, explaining that they were, “not open to the Word of God.” Their refusal, he explained, was not of the message, but of the messenger. “They reject John the Baptist,” he said, who came, “neither eating nor drinking ,” saying of him that he was “a man possessed.” They reject Jesus because they say, “He is a glutton, a drunkard, a friend of publicans and sinners.” They always have a reason to criticize the preacher:

“The people of that time preferred to take refuge in a more elaborate religion: in the moral precepts, such as the group of Pharisees; in political compromise, as the Sadducees; in social revolution, as the zealots; in gnostic spirituality, such as Essenes. They were [happy] with their clean, well-polished system. The preacher, however, was not [so pleased]. Jesus reminded them: ‘Your fathers did the same with the prophets.’ The people of God have a certain allergy to the preachers of the Word: they persecuted the prophets, [even] killed them.”

The Pope went on to say that these people claimed to accept the truth of revelation, “but the preacher, preaching, no. They prefer a life caged in their precepts, in their compromises, in their revolutionary plans or in their [disembodied] spirituality.” They are those Christians, who are always discontented with what preachers say:

“These Christians are closed, they are trapped, sad … these Christians are not free. Why? Because they are afraid of the freedom of the Holy Spirit, which comes through preaching. This, then, is the scandal of preaching, of which St. Paul spoke: the scandal of preaching that ends in the scandal of the Cross. That God should speak to us through men with limits , sinful men, scandalizes: and what scandalizes even more is that that God should speak to us and save us by way of a man who says he is the Son of God but ends [his life] as a criminal. That scandalizes.”

“Seeing these children who are afraid to dance, to cry, [who are] afraid of everything, who ask for certainty in all things, I think of these sad Christians, who always criticize the preachers of the Truth, because they are afraid to open the door to the Holy Spirit. Let us pray for them, and pray also for ourselves, that we do not become Christians sad, cutting off the freedom of the Holy Spirit to come to us through the scandal of preaching.”

December 13, 2013
What will Pope Francis do with the Legion of Christ?
Next Post

December 13, 2013 First Filipino astronaut plans to take a rosary into space
Browse Our Archives
get the latest from
Catholic
Sign up for our newsletter
POPULAR AT PATHEOS Catholic
1