A man on Death Row remembers Fr. Austin, “a priest to call our own”

A man on Death Row remembers Fr. Austin, “a priest to call our own” February 6, 2014 Deacon Greg Kandra 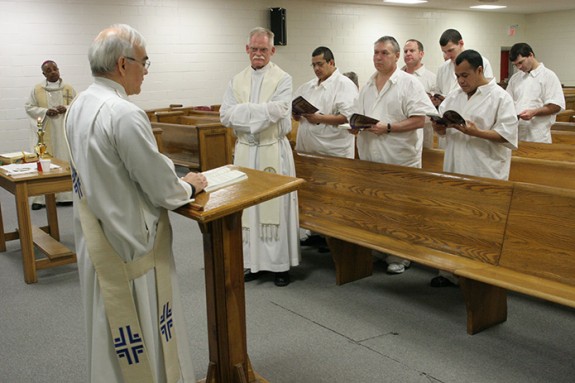 From the Georgia Bulletin comes this beautiful tribute to a priest, written by a man on Death Row:

I actually cannot remember the first time we met, but the years have been long since his arrival to Death Row.

Our deacon was Mr. Tom Silvestri, and at the time we had no priest to say Mass. Instead the bishop would come in a couple of times a year and at times we’d be visited by other priests to say Mass throughout the year. I remember two that came down. One was a priest from Pinecrest Academy. The other was from St. Catherine’s. I apologize for not remembering their names. But we surely appreciated our time with them both. At other times Msgr. Gracz would visit and give Mass.

Then ultimately we were blessed by Father Austin’s presence. We finally had a priest to call our own. I’m smiling as I write.

He was just a man, but we fell in love with his homilies and the way in which he would explain life’s troubles and the support he’d show us guys on the Row.

I missed Mass for a couple months because I felt distant from God, but one day Father Austin came up to my cellblock and he held my hand at the gate. He told me that the church—the church—missed me. At the time we only had four or five guys going out. I guess it was the way he looked at me. Sorta like you’re forgiven. God loves you. …

And that next Thursday, I went out for Mass and it was but two guys, me and my friend, Lenny Drane. The other fellas had attorney call-outs or were on the yard.

I remember thinking that this man comes down here from way up the road, and here sit two guys to say Mass to.

He gave his words, we’d always stand up and he made us, or rather told us to hold hands, to say God’s prayer. I remember looking at those hands, callused up from something or other, and I asked him. Father Austin, I said, what’s up with the rough hands? He told me he worked in a small garden and did other things. He said that God gave Jesus to us and he worked with his hands as a carpenter.

He talked about how we have a place in God’s hands, too, and we are those rough spots or calluses on God’s hands. But with time our roughness can be smoothed by prayer and meditation on God’s messages.

Read it all.  And read more about Austin Fogarty’s life here.

February 6, 2014
"The normal Catholic response to sin is repentance and Confession, not loss of employment..."
Next Post

February 7, 2014 In Canada, former Anglican takes "leap of faith" in ordination as Catholic deacon
Browse Our Archives
get the latest from
Catholic
Sign up for our newsletter
POPULAR AT PATHEOS Catholic
1