Cleared Chicago priest under investigation again, but will remain in ministry

You may remember this story from just last week.  The priest at the center of it is now facing new charges.

From The Chicago Sun-Times:

A Chicago Catholic priest, who became the subject of a second child abuse allegation on Monday, will remain in active ministry but will not be alone with children, the archdiocese of Chicago said Tuesday. 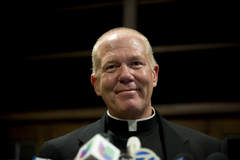 The Rev. Michael W. O’Connell was reinstated last week to active ministry as pastor of St. Alphonsus Catholic Parish on the North Side after a sexual abuse allegation lodged against him in December was deemed unfounded following investigations by the Cook County Sheriff’s office and the archdiocese.

“This morning, a person with information regarding alleged abuse of a minor that happened 15 years ago, met with officials from the Archdiocese of Chicago’s Office for the Protection of Children and Youth,” archdiocese spokeswoman Susan Burritt said in an emailed statement Tuesday.

“The Office for Child Abuse Investigations and Review will review the limited information provided and discuss the matter with the Independent Review Board for its advice,” the statement said.

“Unless there is further information that warrants additional action,” O’Connell will remain in active ministry, the archdiocese said, noting that he “has agreed not to be present in the parish school or alone with a child, until these issues are resolved.”

April 23, 2014 Report: Pope phoned divorced and remarried woman to say she can receive communion—UPDATED
Browse Our Archives
Follow Us!

What's the Biggest Difference Between Catholics...
The Cordial Catholic
Books by This Author Books by Deacon Greg Kandra