The Archbishop of Dublin, Diarmuid Martin, has backed the Pope’s call for open and immediate discussion on married priests. 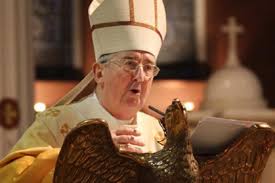 Dr Martin told an Easter service at Dublin’s Pro-Cathedral that he is open to dialogue on married men in the priesthood.

His comments, reported by the Irish Independent, come after Pope Francis signaled the need for the Catholic Church to discuss the issue.

Celebrating his tenth anniversary as Dublin’s archbishop, Dr Martin said ordaining women into the church to make up for the shortage of priests was ‘not on the table at the moment.’

The report says Dr Martin acknowledged the shortage of priests will spark fresh debate on allowing Catholic priests to be married.

The Archbishop said, “The Pope said he is open to the question, he wants to listen to local churches. But he said no local church, no national church should go on its own.

“I’ll wait and see, certainly in missionary countries it must be very important.

“More focus must be put on the deacons and discovering where priests and lay people can take part in a more collaborative way in our parishes.”

April 27, 2014
Douthat: "The phone call and the coverage of it suggest perils for this papacy..."
Next Post

April 27, 2014 At the canonizations: "I wanted to minister literally to the fringes"
Browse Our Archives
Related posts from The Deacon's Bench