On the Holy Thursday foot washing: “It didn’t exclude women until 1955…” 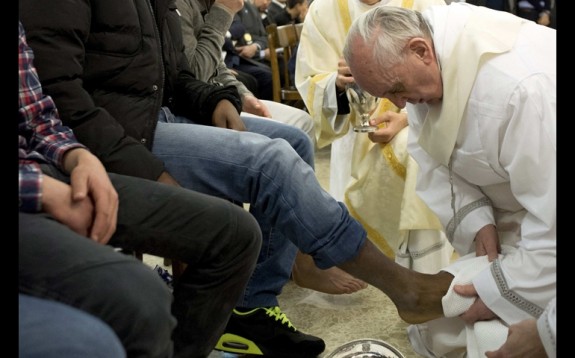 Some interesting history on this controversial rite, from David Gibson at Religion News Service, via NCR:

Neither were part of the Holy Thursday liturgy, and popes and clerics routinely washed the feet of poor people as a sign of service and humility. In convents, as well, “woman washed feet and had their feet washed,” and they washed the feet of guests and children, said Rita Ferrone, the author of several books about liturgy and a consultant to U.S. dioceses on liturgical matters.

“Foot washing does have a long tradition,” Ferrone said, “and it didn’t exclude women up until 1955.”

That’s when Pope Pius XII simplified the Holy Week rites, a reform that included folding the foot-washing ritual into the Holy Thursday Mass before marking Jesus’ crucifixion on Good Friday.

The problem is that back then, Catholic women were not allowed into the restricted space near the altar and, unlike today, they could not have any part in the Mass. So the rule was that 12 chosen men — “viri selecti” in the Latin — would have their feet washed by the priest or bishop.

With that change, the foot-washing rite also came to be seen as a kind of recreation of the Last Supper and the institution of the priesthood.

“The tradition was not to have it be a dramatization of what Jesus did at the last Supper but to be a response to the command to humble service,” Ferrone said.

There’s much more about the debate this ritual has caused, with arguments on both sides. Read it all.

April 16, 2014 Boston's O'Malley: "Say no to pessimism"
Browse Our Archives
get the latest from
Catholic
Sign up for our newsletter
POPULAR AT PATHEOS Catholic
1

Intergenerational Interdependence is a Blessing Not a Curse
From my reading this morning: 10 Do not glorify yourself by dishonoring your...
view all Catholic blogs
Copyright 2008-2021, Patheos. All rights reserved.