From The Boston Globe’s John Allen:

As he prepares to declare two revered 20th-century pontiffs as saints, Pope Francis once again proved that he rivals John XXIII and John Paul II in terms of star power by persuading a renowned anti-clerical politician to suspend a hunger and thirst strike that doctors and friends believed was putting his life in jeopardy. 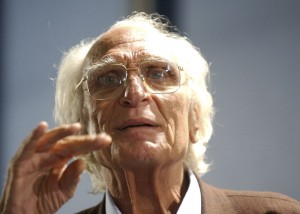 Marco Pannella, the 83-year-old leader of Italy’s Radical Party, had refused to eat or drink liquids to protest what he sees as inhumane conditions in Italy’s overcrowded prison system. Pannella refused to suspend the strike despite undergoing an operation earlier in the week for an aneurysm in his aorta, even declining to accept blood transfusions.

On Friday afternoon, Pope Francis phoned Pannella at Rome’s Gemelli hospital, with the two men speaking for roughly 20 minutes. Afterwards, Pannella said that out of respect for the pope, he had agreed to drink some coffee and to accept two blood transfusions that medical personnel urged him to undergo.

According to a transcript of the call released by the Radical Party’s radio station, Francis vowed that he would help Pannella “fight against” the conditions facing the prisoners, and urged the elderly politician to “be courageous.”

…A Vatican spokesperson neither confirmed nor denied the call, citing a policy of not commenting on the pope’s personal conversations. However, the spokesperson noted that Pannella has previously expressed esteem for Francis and especially the pontiff’s visit last year to a youth prison in Rome to wash the feet of inmates.

…Francis’s gesture is all the more remarkable given that the Radical Party, and Pannella in particular, have long battled the Church on a wide range of issues, from divorce and abortion to seeking to abolish the tax and legal privileges afforded the church under a 1984 treaty with the government.

Pannella is a self-described atheist and bisexual, although he has voiced appreciation over the years for social justice positions of recent popes.

April 26, 2014
Would you recognize a loved one who was homeless?
Next Post

April 26, 2014 The debate over canonizing two popes
Browse Our Archives
get the latest from
Catholic
Sign up for our newsletter
POPULAR AT PATHEOS Catholic
1