From The Manchester Union Leader in New Hampshire:

The one-time top ranking priest in the Diocese of Manchester, the Rev. Msgr. Edward J. Arsenault, was sentenced to four years in New Hampshire State Prison today by a judge who urged him to do good in prison. 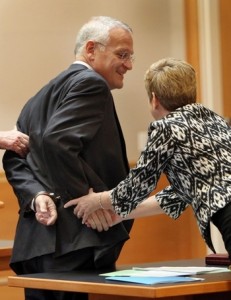 Arsenault was also ordered to repay $300,000 in restitution to the Diocese, Catholic Medical Center and the estate of fellow Monsignor John Molan.

“I’m truly and sincerely sorry for what I did,” said Arsenault in Hillsborough County Superior Court-North. He paused to gain his composure when he offered apologies to “the priests and the faithful” of the Catholic church.

“I broke the law and I violated the trust of others,” he said. The one-time pudgy priest was trim and dressed in a crisp dark suit and tie. He carried a Bible with him.

Several key facts came out before Arsenault admitted his guilt:

• He was engaged in a relationship with Luke Parkin, who is identified on Internet websites as a gay composer and recording artist with nearly 70 albums to his credit. Prosecutors said Arsenault lavished Parkin with expensive meals, trips to locations such as San Francisco and New York, flowers, a cellphone, an extended-stay hotel in Massachusetts and even for medications.

Parkin has not been charged with any crime, said prosecutor Jane Young.

• The CMC theft is still part of a criminal investigation. Arsenault received $104,000 in consulting fees shortly after leaving the CMC board. He signed a contract with then-hospital President Alyson Pitman Giles.

Young said part of the investigation is who had knowledge of the contract. “Was this a valid contract or a contract created for reasons that were other than valid reasons,” Young said.

April 24, 2014 Lifetime plans reality series "The Sisterhood" about women becoming nuns
Browse Our Archives
get the latest from
Catholic
Sign up for our newsletter
POPULAR AT PATHEOS Catholic
1