That quote, believe it or not, comes from a leading Italian bishop and advisor to Pope Francis.

This item is tearing up the interwebs—and raising a lot of eyebrows:

The Catholic Church should listen to all the arguments in favour of gay relationships, Communion for remarried divorcees, and ending mandatory celibacy for priests, a senior Italian bishops has insisted. 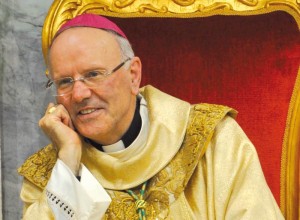 The secretary-general of the Italian bishops’ conference (CEI), Nunzio Galantino, bishop of the southern diocese of Cassano all’Jonio, told the Florence-based La Nazione newspaper yesterday that he wanted church leaders to open their mind to different views on these issues.

He said: “My wish for the Italian Church is that it is able to listen without any taboo to the arguments in favour of married priests, the Eucharist for the divorced, and homosexuality.”

Bishops from around the world are due to debate the Church’s teaching on such issues at their Extraordinary Synod for the Family in October, having dispatched questionnaires to every diocese for feedback.

Bishop Galantino, 65, said that the Church had invested a lot of its time on issues relating to the sanctity of life, perhaps at the expense of other important issues. He said: “In the past we have concentrated too much on abortion and euthanasia. It mustn’t be this way because in the middle there’s real life which is constantly changing.

“I don’t identify with the expressionless person who stands outside the abortion clinic reciting their rosary, but with young people, who are still against this practice, but are instead fighting for quality of life, their health, their right to work.”

Read more, including some reaction, here.  Fr. Z. has some thoughts, too.

Some background on Bishop Galantino, via Wikipedia:

He was named a bishop on 9 December 2011 by Pope Benedict XVI and consecrated on 25 February 2012 in Cerignola by Cardinal Angelo Bagnasco. On that occasion, he asked that money ordinarily spent on gits for him should be spent on services for the poor. While bishop he has lived at the seminary not the bishop’s palace, eschewed the services of a secretary and chauffeur. He asked to be called “Don Nunzio” instead of the customary title “Your Excellency.”

On 30 December 2013, Pope Francis named him interim General Secretary of the CEI. As he did so, Francis wrote to the people of Galantino’s diocese to “ask permission” to borrow their bishop. He wrote: “I know you won’t like that he’s being taken away, and I understand”. Rather than leave his diocese, Gallantino asked to be allowed to divide his time between his new post and his duties as bishop. La Corriere della Seradescribed Galantino’s appointment as the selection of someone who had not sought the appointment and said it represented a break with recent popes’ political approach to the CEI, reflected Francis’ emphasis on pastoral activity, and signaled his expectations for the next president of the CEI. On Wednesday, 26 March, 2014, Pope Francis made the appointment permanent (for a full term).

May 15, 2014 "Be like a deacon this week..."
Browse Our Archives
Related posts from The Deacon's Bench