Is Harvard hosting a Black Mass?—UPDATED

Is Harvard hosting a Black Mass?—UPDATED May 7, 2014 Deacon Greg Kandra

This has popped up on Facebook in several places, so it seems worth noting.

Several bloggers have gotten emails announcing this event for next week, and Women of Grace has details:

The Harvard Extension Cultural Studies Club is hosting a black mass on May 12 to be staged by The Satanic Temple and which will include a consecrated host.

According to a press release from The Satanic Temple, they plan on presenting the black mass at the Queens Head Pub in Memorial Hall, 45 Quincy Street, Cambridge, MA along with “an academic narration that explores the ritual’s unique history and practice.”

Priya Dua, of The Satanic Temple’s Public Relations office confirmed to us in an e-mail that “Yes, there will be a consecrated host at the black mass.”

This sounds, frankly, incredible. If it’s true, this is horrifying. 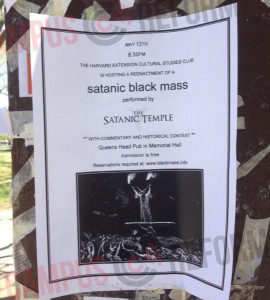 The only source for this, right now, is The Satanic Temple, through its emails and flyers that have been posted around Harvard.

The website for the Queens Head Pub, likewise, lists nothing about this event. The pub, in fact, says it’s closed for the summer.

According to the report at Women of Grace, no one at Harvard has responded to requests for an interview about this, let alone confirmed it.

Again, the only confirmation comes from one source: the “Public Relations Office” of The Satanic Temple.

FWIW, The Satanic Temple is reportedly the same operation involved in erecting that statue of Satan in Oklahoma.

Add it all up, and I’d take all this with a grain of salt until Harvard or a second source can confirm that this event is real.

Meantime: I see my pal Elizabeth Scalia is having similar thoughts.

9: 45 am UPDATE:  The Harvard Extension School says on its Facebook page, “We are looking into this and will share more information as we have it.”

11:15 am UPDATE: The Harvard Extension School has issued a statement. Tellingly, the school does not mention that the “controversial student event” includes a Satanic ritual that mimics and mocks a sacred liturgy, the Catholic Mass. How brave of them.

Students at Harvard Extension School, like students at colleges across the nation, organize and operate a number of independent student organizations, representing a wide range of student interests.

Harvard Extension School does not endorse the views or activities of any independent student organization. But we do support the rights of our students and faculty to speak and assemble freely.

In this case, we understand that this independent student organization, the Cultural Studies Club, is hosting a series of events—including a Shinto tea ceremony, a Shaker exhibition, and a Buddhist presentation on meditation—as part of a student-led effort to explore different cultures.

Media inquiries should be directed to Jeff Neal, jeff_neal@harvard.edu, in the Harvard University Public Affairs and Communications Office.

May 6, 2014
A shocking glimpse at a woman after an abortion: "She is a mother in grief"
Next Post

May 7, 2014 Raleigh unveils new plans for scaled-back cathedral
Browse Our Archives
get the latest from
Catholic
Sign up for our newsletter
POPULAR AT PATHEOS Catholic
1