Pope on celibacy: “The door is always open” to changing the discipline

While he’s not saying anything we didn’t already know, it is the first he’s spoken about the issue as pope. 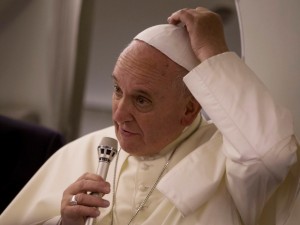 Pope Francis says he believes that Roman Catholic priests should be celibate but the rule was not an unchangeable dogma and “the door is always open” to change.

Francis made similar comments when he was archbishop of Buenos Aires but his remarks to reporters on a plane returning from a Middle East trip were the first he has made since becoming pope.

“Celibacy is not a dogma,” he said Monday in answer to a question about whether the Catholic Church could some day allow priests to marry as they can in some other Christian Churches.

“It is a rule of life that I appreciate very much and I think it is a gift for the Church but since it is not a dogma, the door is always open,” he said.

May 27, 2014 Michigan bishop warns Catholics not to take part in attempted ordination of woman next weekend
Browse Our Archives
Related posts from The Deacon's Bench