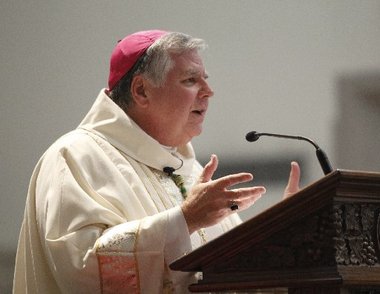 Bishop Paul Bradley of the Catholic Diocese of Kalamazoois warning Catholics not to participate in a ceremony Saturday in which a Three Oaks woman will be ordained by the group Roman Catholic Womenpriests.

The May 31 ceremony for Lillian Lewis, 75, will be held at First Congregational Church in Three Oaks. The ceremony will be conducted by Joan Houk, a Womenpriests bishop.

In a two-page letter inserted in the weekly newsletter distributed at Catholic Masses over the weekend, Bradley strongly criticized the upcoming event as one that will “undermine the unity of the Church.” (Click here for a pdf of Bradley’s letter.)

“With great sadness, I share with you the serious news that a woman in our diocese is attempting to participate in the simulation of the sacrament of priestly ordination,” Bradley wrote.

“… This action will further separate her from the Church in a very grave manner. It also has the potential to cause great confusion for the faithful,” the letter said.

The letter does not name Lewis, but says she and direct participants in the ordination will be excommunicated, and those who “give witness and encouragement to this fundamental break with the unity of the people of God place themselves outside of the full community with the Church.”

That means, the letter said, they may not receive the sacraments of the Church until they go to confession.

The letter says the Catholic Church teaches that all people have “equal dignity,” but because Jesus Christ was a man, the “imagery which God has given can only be respected with and lived with an ordained priesthood reserved to men.”

The letter refutes contentions that the Church is punishing contrarian views.

“People are free to believe what they want without coercion,” Bradley wrote. “However, when we are baptized, we promise to believe all that God has revealed and all that His Church teaches; no one is forced to be Catholic.”

May 27, 2014
Pope on celibacy: "The door is always open" to changing the discipline
Next Post

May 27, 2014 Christianity resurgent?
Browse Our Archives
Related posts from The Deacon's Bench