The pope who kisses hands—UPDATED

The pope who kisses hands—UPDATED May 26, 2014 Deacon Greg Kandra

Are we seeing a new papal tradition?

St. John Paul in his travels would famously kiss the earth of every country he visited.  His successor, Francis, appears inclined to kiss something else: hands.

A few weeks ago, Pope Francis caused a small sensation when he kissed the hand of the elderly Salesian Don De Paolis, a priest who has worked to try and change the church’s teaching on homosexuality. 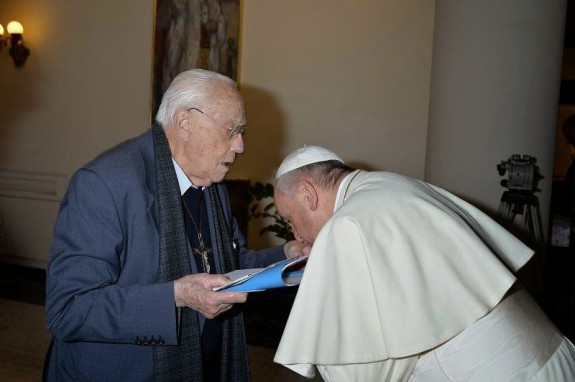 This weekend, Francis kissed the hand of the Ecumenical Patriarch. 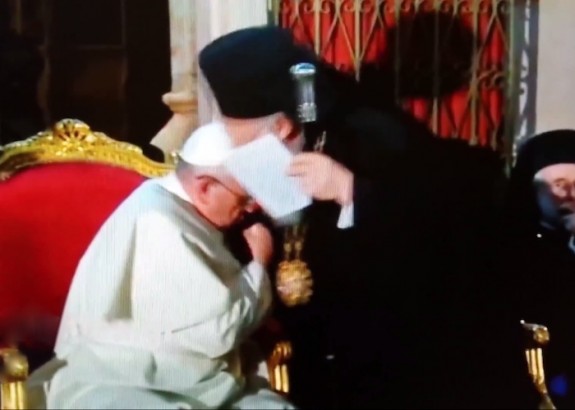 Video of the moment is below:

And this morning, he performed the same gesture on survivors of the Holocaust. 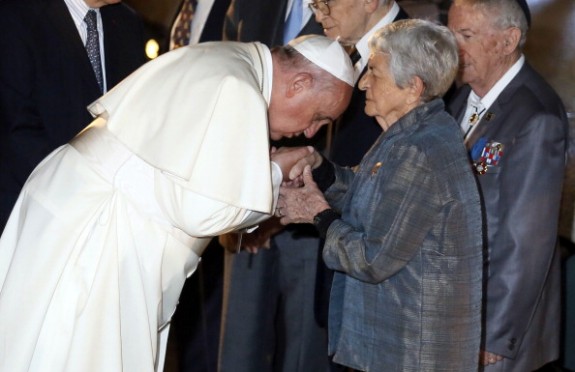 This last act of humility was accompanied by a remarkable discourse at Yad Vashem Holocaust memorial—remarks that were part prayer, part poem, part cry from the heart:

Where are you, o man? What have you come to?
In this place, this memorial of the Shoah, we hear God’s question echo once more:
“Adam, where are you?”
This question is charged with all the sorrow of a Father who has lost his child.
The Father knew the risk of freedom; he knew that his children could be lost…
yet perhaps not even the Father could imagine so great a fall, so profound an abyss!
Here, before the boundless tragedy of the Holocaust,
That cry – “Where are you?” – echoes like a faint voice in an unfathomable abyss…
Adam, who are you? I no longer recognize you.
Who are you, o man? What have you become?
Of what horror have you been capable?
What made you fall to such depths?
Certainly it is not the dust of the earth from which you were made.
The dust of the earth is something good, the work of my hands.
Certainly it is not the breath of life which I breathed into you.
That breath comes from me, and it is something good (cf. Gen 2:7).
No, this abyss is not merely the work of your own hands, your own heart…
Who corrupted you? Who disfigured you?
Who led you to presume that you are the master of good and evil?
Who convinced you that you were god?
Not only did you torture and kill your brothers and sisters,
but you sacrificed them to yourself, because you made yourself a god.
Today, in this place, we hear once more the voice of God:
“Adam, where are you?”
From the ground there rises up a soft cry: “Have mercy on us, O Lord!”
To you, O Lord our God, belongs righteousness;
but to us confusion of face and shame (cf. Bar 1:15).
A great evil has befallen us, such as never happened under the heavens (cf. Bar 2:2).
Now, Lord, hear our prayer, hear our plea, save us in your mercy.
Save us from this horror.
Almighty Lord, a soul in anguish cries out to you.
Hear, Lord, and have mercy!
We have sinned against you. You reign for ever (cf. Bar 3:1-2).
Remember us in your mercy.
Grant us the grace to be ashamed of what we men have done,
to be ashamed of this massive idolatry,
of having despised and destroyed our own flesh
which you formed from the earth,
to which you gave life with your own breath of life.
Never again, Lord, never again!
“Adam, where are you?”
Here we are, Lord, shamed by what man,
created in your own image and likeness,
was capable of doing.
Remember us in your mercy.

UPDATE: Simcha Fischer has her own take on the phenomenon:

You may wish that the Pope would do something different, besides imitating a saint. You may long to see him turn his back on the same people you turn your back on, come thundering down on the sinners you find especially revolting. But this is what he’s doing instead: kissing hands. He is acknowledging that we are here to bring Christ to each other.

We hear that Pope Francis is “sending the wrong message” when he consorts with sinners like the dissenting activist priest. But it’s the same message God sent to Adam when He called to him in the garden. It’s the same message that Jesus was sending when He told the story of the prodigal son. When man sins, God calls him, begs him to return. The hands with the stigmata reach out for the hands that killed, that tortured, that squandered, that betrayed.

May 26, 2014 Check this out: one parish's own news show—and this place is a hotbed for vocations
Browse Our Archives
get the latest from
Catholic
Sign up for our newsletter
POPULAR AT PATHEOS Catholic
1

Resurrection Debate #3: Did Jesus Publicly Claim to...
Michael J. Alter is the author of the copiously researched, 913-page volume, The...
view all Catholic blogs
Copyright 2008-2021, Patheos. All rights reserved.
error: Content is protected !!