A priest—or two or three—in the family

An impressive vocation story from Pennsylvania:

Kyle Sahd was in the second grade, preparing for his first Holy Communion at Holy Trinity Roman Catholic Church in Columbia, when he thought about the wonder of the sacraments, and how he might want to become a priest. 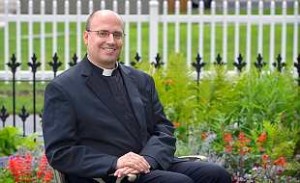 His teacher, Sister Anna Cosgrove, “got us interested in the faith,” he recalls. “It was a living faith, with saints who actually lived up to holiness — it’s not something unattainable.”

Today, in a Mass at St. Patrick Cathedral in Harrisburg, Kyle Sahd will be ordained at age 35 as a priest.

Watching as he takes his priestly vows will be his identical twin, Timothy, a seminarian on his own path to the priesthood.

An older brother, the Rev. Christopher Sahd, a priest in the Diocese of Scranton, will be looking on, too.

He says his parents, Ronald and Karen Sahd of Columbia, encouraged him and his three brothers to choose a path, any path, so long as it was “grounded in the faith.”

Kyle says his eldest brother, Dan, who’s married and has three “beautiful children,” is a “big inspiration for me as well. The mission of the church isn’t only the deacons and the priests spreading the faith. It’s all the baptized.”

The family prayed at mealtimes and attended Mass. Ronald and Karen Sahd encouraged their sons to get involved with their parish as altar servers and youth group members.

Timothy Sahd, who’s taking part in a summer spirituality program at the Institute for Priestly Formation  in Omaha, Nebraska, said his “Grandma (Lucille) Sahd was a huge influence in my life.”

It was through her, he says, that he first “heard a calling.”

“She gave a beautiful witness to the faith by the way she lived,” writes Timothy Sahd, in an email. “She prayed the rosary three times a day and attended daily Mass. Most people who met her saw God at work in her.

“When we were kids, she used to take Kyle and I to weekday Mass with her whenever we slept over at her house … I grew to love the Mass because of these trips to church with her.”

June 28, 2014
Deacons to be ordained to serve the Mayans of Mexico
Next Post

June 29, 2014 Ordination update: 19 new deacons for Sacramento
Browse Our Archives
get the latest from
Catholic
Sign up for our newsletter
POPULAR AT PATHEOS Catholic
1