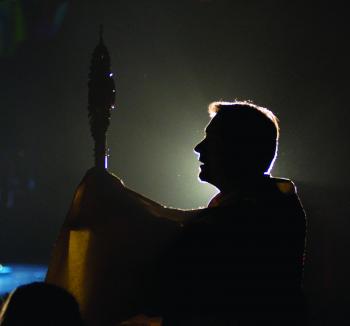 This is pretty encouraging, from Tim Muldoon via Elizabeth Scalia:

Today Boston College has released the results of a report on the influence that college experiences had on young men in the United States who decided to begin studying for the priesthood. That report highlights a number of interesting points:

• Some 350,000 never-married men have “seriously” considered priesthood
• A large number of those who entered the seminary had at least three people encourage them to do so.
• Most seminarians or new priests have had some experience in a Catholic college (compared to only 7% of the Catholic population who attend a Catholic college).

Read the full report here, and the new study by the Center for Applied Research in the Apostolate, on which part of the report is based, here.

The report speaks for itself, so I will not repeat all its findings here. It will be of particular interest to bishops, vocation directors, Catholic college presidents, and directors of Catholic campus ministries. What I wish to highlight here is a specific point that emerges from the report: namely, the question of the extent to which campuses promote a culture of vocations.

What is a culture of vocations? I point to two recent stories in the mainstream media which highlight examples. The first is in southern Louisiana and the second is in rural Michigan. In both places, the number of young men choosing to be priests is much higher than the national average. And while there are clearly many variables in the path of discernment to priestly life, what is clear is that it does not happen without encouragement of others. Catholic families, schools, parishes, and colleges all play a role.

The Boston College report highlights the importance of multiple sources of encouragement, which have an exponential effect on the likelihood of someone choosing a vocation within the Church (both men and women). Researcher James Cavendish pointed to sociologist Peter Berger’s notion of “plausibility structures”—those networks of friends, family, and community that “help to sustain our belief and commitment to things which might in other settings seem implausible to believe.” In short, they are characterized by the virtue of friendship in a shared commitment to a common mission, a common imagination about why the community exists.

A culture that fosters priestly vocations is also likely to foster discernment to all forms of life: in other words, it’s likely to be a healthy, loving culture in which all people come to deeper understanding of the kind of people God is calling them to be…. A culture of vocations to the priesthood, if rooted in an authentic understanding of the discernment process, will foster not only vocations to priesthood and religious life, but also vocations to friendship, various professions, married life, and citizenship. For such authentic discernment is never about crass recruiting; it is about listening to the voice of God. To cite the example of one young man whose story is recounted in the Boston College report, it is about not praying specifically for priesthood, but for the will of God—which for some leads to priesthood.

June 24, 2014 Walking with Jesus
Browse Our Archives
Related posts from The Deacon's Bench

Here In The Disaster
The last few days haven't been very good. I'm having my usual...
view all Catholic blogs