Report: shooting of Phoenix priests is just the latest incident in wave of church violence in US

Report: shooting of Phoenix priests is just the latest incident in wave of church violence in US June 16, 2014 Deacon Greg Kandra 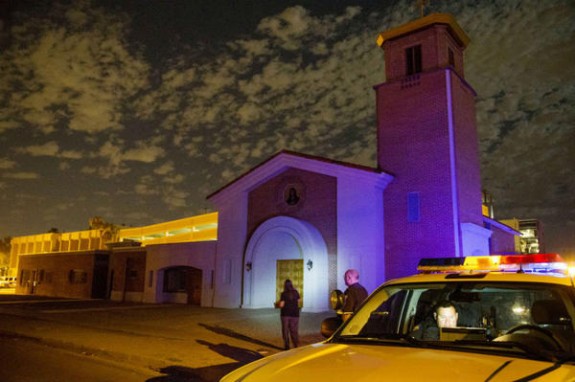 Details from The Christian Science Monitor:

The shooting of two priests at a Phoenix church is the latest in more than 780 deadly attacks in US places of worship in the past 15 years.

Phoenix police responded to a call about a burglary at Mater Misericordiae (Mother of Mercy) Mission shortly after 9 p.m. local time on Wednesday and found two badly injured priests in the rectory, police say. The Rev. Kenneth Walker later died at the hospital and the Rev. Joseph Terra is in critical condition.

Investigators have yet to determine if robbery was the motive for the assault, according to Phoenix Police Sgt. Steve Martos.

Robbery is one of the leading causes of deadly attacks in places of worship in the United States, according to statistics compiled by church security specialist Carl Chinn, who is based in Colorado Springs, Colo.

“Criminals tend to make these things up in their minds that the church is really rich,” Mr. Chinn says. “Maybe they have been to church one or two times and seen offerings taken up.”

Chinn began tracking deadly incidents on religious property a few years after he was taken hostage by a disgruntled gunman in 1996 while working as a building engineer for Focus on the Family, a Christian ministry based in Colorado Springs. The gunman eventually released the hostages unharmed and surrendered to police.

There were 781 deadly attacks on church properties between when he began rigorously cataloging incidents on Jan. 1, 1999, and when he last updated his database on Jan. 11 of this year. (Chinn says he typically waits for law enforcement to complete its investigation of an incident before posting it to his site.)

“I quickly realized that there was no clear definition as to how much of a problem this was,” he says. “I would hear news stories that would say something like, ‘This was the 5th church shooting in 10 years,’ when I had been cataloging a whole lot more stories than that.”

In the years since that fateful day at Focus on the Family, Chinn has encouraged religious institutions to implement emergency planning procedures.

June 16, 2014 Pope Francis: "Who pays the price for the corruption of a prelate?"
Browse Our Archives
get the latest from
Catholic
Sign up for our newsletter
POPULAR AT PATHEOS Catholic
1