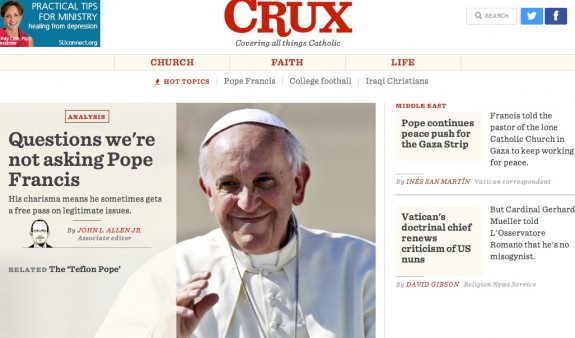 This unusual new media venture was unveiled today, and The Neiman Journalism Lab looks at what lies behind this new website devoted to “all things Catholic”:

Looking at the newly launched Catholic news site Crux, you’ll find plenty of stories on the travels and exploits of Pope Francis. This makes sense — he’s the head of the church and easily one of the most charismatic leaders operating on the world’s stage.

What you won’t readily find is an indication of who or what is behind the new site dedicated to “Covering all things Catholic.” Only if you scroll to the bottom of the homepage, tucked in the footer, will you see the text: “A Boston Globe Media website.”

It’s been almost a year since Red Sox owner John Henry completed his purchase of the Globe, and he’s pushing forward on a plan he hopes will help broaden the company’s readership beyond people who want a printed newspaper on their doorstep. Crux, as the site’s branding makes clear, is aiming for a readership far outside the 617 area code to the more than 1 billion Catholics worldwide.

Crux joins a small, and growing,network of sites connected to the paper, including Boston.com,BostonGlobe.com, BDCWire, and the most recently launched Beta Boston. For newspapers like the Globe, diversification typically means finding a way to spin off parts of the existing business to niche audiences inside a geographic boundary. Crux shares a strategy more common with online publishers who want to tap digital audiences through interest areas.

“We saw an opportunity to fill a need,” said Globe editor Brian McGrory. “There’s a real hunger. We’re at a unique moment.”

…Crux launches with a small staff anchored by John Allen. On a day-to-day basis he’ll be writing news and analysis about the the Vatican, Pope Francis, and how the church interacts with global politics. Margery Eagan , joining Crux from The Boston Herald, will be the site’s spirituality columnist. Inés San Martin is the site’s on-the-ground reporter at the Vatican, and Michael O’Loughlin is a national correspondent. Teresa Hanafin, a former editor of Boston.com, is the editor of the site.

Allen said they hope their independence and backing from the Globe will give Crux credibility and a distinct identity. “The trick is to be close enough to the story to get it right, but far enough away to be objective,” he said.

FWIW: Some with long memories—or links to Washington media—may remember Brian McGrory’s celebrated older cousin, the great columnist Mary McGrory.  Back in my youth, she was required reading inside the Beltway, and often outside it, too. She earned the enmity of people like Richard Nixon—making it to his infamous “enemies list”—and  along the way won a Pulitzer.

As an interesting footnote…back in the 70s, Mary McGrory was in Rome for the election of John Paul I, and what she had to say about him sounds a lot like what is being said about Francis:

Joy filled the square. Something worked in Rome for a change. The cardinals had found someone with the charisma of John and the caution of Paul. They had done the world a good turn, everyone agreed. No one knows of John Paul can rescue the church from the massive indifference which shows in the defections from clergy and laity. But there’s no question that, in the shortest possible time, he has given it a lift and done what leaders do, caused hope to raise its head.

September 3, 2014 Another gay teacher reportedly fired from Catholic school over pregnancy
Browse Our Archives
get the latest from
Catholic
Sign up for our newsletter
Books by This Author Books by Deacon Greg Kandra